Getting ready for the PGA Champions Tour in Newport Beach

It’s just about that time again with the greatest 50 year old and over golfers in the world invading Newport Beach Country Club this week at the Toshiba Classic, one of the best run tournaments on any tour.  A couple of British Open champs Mark Calcavecchia and Ian Baker-Finch will head this year’s rookie class joining other major champions including Tom Watson, Nick Price, last year’s champ Fred Couples, and local favorites Mark O’Meara and Corey Pavin.  And just how popular is this event amongst tour members?  Well, hall of famer Lee Trevino says the Toshiba Classic will be the only official full-field Champions Tour event that he plans to play in 2011.  Also in the field is 2008 Toshiba champ and 2-time Masters winner Bernhard Langer who was kind enough to call me today for the following interview that not only covers his great start to this year, but also Bernhard’s feelings on why Tiger Woods is currently struggling with his game more than ever.

I then spoke with Masters and Open champ Mark O’Meara who’s always coming home when he plays at Toshiba, growing up in So-Cal while achieving All-American status at Long Beach State. Amongst several subjects we covered including his buddy Tiger Woods’ current struggles on the course, was the time the he came on my Long Beach Ice Dogs radio cast from Orlando to be a guest just several weeks after winning his 2 majors in ’98. That Long Beach connection was too much for me to pass up and O’Meara enjoyed his time on the air with me so much that he stayed the entire first period as my color commentator. If I recall, his Orlando Solar Bears from the now defunct IHL struggled while he was on, but he had a good time anyway doing something different for his real hometown team. 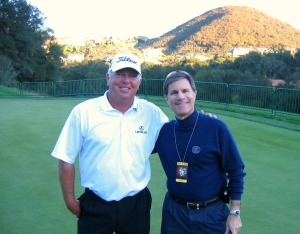 Another Hall of Famer Tom Watson called in and we chatted about a few subjects including his new putting stance and great new idea to take on the younger guys on the regular tour which got me thinking…maybe this could really be a late-season event…I’d watch it!

Chatting it up with Tom Watson at Toshiba

Check in for more player inteviews from Toshiba Classic week of March 7-13.