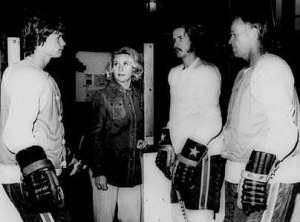 Mr. and Mrs. Hockey and sons

March is not only the month of college hoops madness or baseball’s spring training. It’s also the month that back in 1928, probably the greatest 2-way hockey player who ever lived was born in Saskatchewan. His name, Gordon Howe. He’s also the only player I’ve ever known to have had nicknames in double figures such as Mr. Elbows, Power, Mr. Everything, The Legend, Mr. All-Star, and Number 9. But there’s only one official name that sums up what he’s all about and that’s
“MR. HOCKEY”! 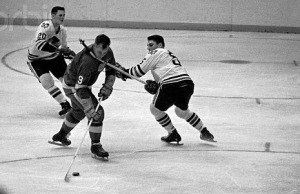 Gordie getting a taste of his own medicine

And Gordie did it all, and for a length of time that’s impossible to fathom. Howwwwwe about skating for 26 years in the NHL while winning 4 Stanley Cups while being the face of the game as a 21 time All-Star before retiring with more records than the Beatles (and he still holds several to this day-but not for total NHL goals scored which Gretzky broke in 1994!). You can see how Gordie was relieved when it was over after traveling around waiting for ‘The Great One’ to finally become the greatest one!

And oh howwwwe I love this stat, Howe was in the National Hockey League in 1948 when the great Bobby Orr was born and he was still in the league when Orr retired in 1979. Another classic conquest that will never be touched is coming back at the age of 69 to take a shift in the old IHL with the Detroit Vipers to be the only pro to ever play in 6 straight decades (40’s-90’s). I was in the league then calling Long Beach Ice Dogs games but unfortunately we were not on the schedule for that one, which would’ve been a real thrill to see it and call it live.

Gordie at 69 with Detroit Vipers

But with all of Gordie’s legendary achievements on the ice, there was none greater than coming back from a 2 year retirement which included his Hall of Fame induction to then getting to play 7 years with his 2 sons Mark and Marty starting at the age of 45. First with the WHA Houston Aeros (where they won 2 Cups together) and then finishing up with the New England/Hartford Whalers who moved Gordie back to the NHL for his final curtain call in 1979/80. You want more rediculous numbers on this physical phenom? How about Howe playing in more regular season games (80) during his final season than in any of his other 31 pro seasons! Folks, this isn’t slow-pitch softball…this is the NHL and as Mark will tell you in our chat that Dad wanted to play even another year! You think that kids could learn something from that scenario? Are you listening Greg Oden and Andrew Bynum? THE man finished as a 52 year old grandpa in the Stanley Cup playoffs with a goal and assist in 3 games after scoring 15 goals/26 assists along with 42 penalty minutes during that last regular campaign just to give the opposition something to remember him by forever! 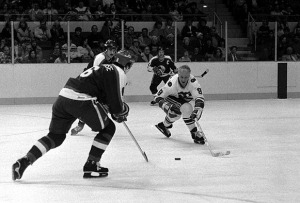 Gordie at 51 vs. some guy named Barry Melrose of Winnipeg

A chip off the ol’ block himself, Mark Howe played 16 of his 22 pro seasons in the NHL before hanging up the skates for a long and distinguished scouting career with ironically his Dad’s beloved Detroit Red Wings. I first met Mark while on a long eastern road trip in the ’96 or ’97 IHL season and thought what great stories he could provide our Ice Dogs radio listeners with as a between periods guest and he’s been a nice friend ever since. So how apropos it was to see Mark on his only trip out West this season on Sunday at Honda Center before the Ducks and Avalanche collided and again the next night at Staples on NHL trade deadline day before the Kings took on his Red Wings. Folks, no exaggeration here: two more humble, down to earth and straight forward gentlemen you will never meet than Mark and Gordie Howe. And it was great to get a very candid and sincere update on how his legendary father is doing before reaching the big 8-3 on March 31 along with some inside stories I just know you’ll be telling others forever.
A HAPPPPPY AND HEALTHY BIRTHDAY GORDIE…AND HOWWWWWWE! 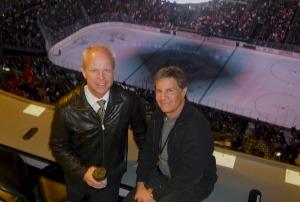 Mark and the other "Mr. Hockey"