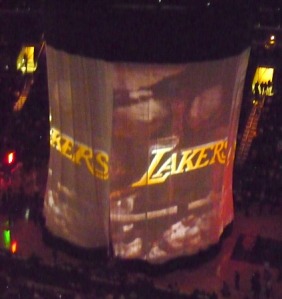 The NBA imposed a 2 games suspension today on Lakers center Andrew Bynum for his flagrant foul 2 nights ago against Minnesota’s Michael Beasley in the 4th quarter. 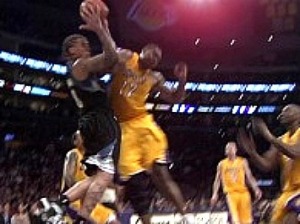 So that was the obvious topic of discussion in coach Phil Jackson’s pregame chatter with us media types. I thought you might like to hear the entire discussion which included Phil talking about Kobe Bryant’s recent shooting slump as he battles through his ankle injury and how the Lakers’ improved defense is the key to them winning all but one of their games since the All-Star break.

I also spoke with Lakers assistant coach Brian Shaw before the Blazers game and asked him about the impact of life without the new-look defensive prowess of Bynum?…

The Lakers then went out and beat Portland with a late surge by 4 points and in my postgame chats, I got the chance to ask Kobe Bryant, Derek Fisher, and Lamar Odom how they felt about the 2 games suspension to Bynum?…

So it’s now 12-1 and counting for the Lakers since the All-Star break with new-look Phoenix in town on Tuesday night. And actually not having Bynum against the smaller Suns shouldn’t be that disasterous for the Lakes who will be heavily favored again to win their 4th straight game.