It really is time for ‘Dodgers Baseball’

I had the choice of either covering the big Lakers-Mavericks showdown at Staples tonight or sitting in 90 plus degree temps at Dodger Stadium to get the baseball season underway-and it really was a no brainer for me. There is simply nothing like an opening day in baseball and combine that with the Dodgers and the hated Giants colliding on the same field and it’s my kind of party. And then add the fact that San Francisco comes in as the reigning World Series champs in front of a 56,000 plus sellout crowd and you really have a great start to the season no matter where either team ends up?

The other personal perk is getting to see some people that I would only likely run into during the baseball season. One of them being THE ultimate play by play voice Vin Scully who I got to give my annual greeting of ‘Happy New Year’ and a handshake to completing a good night that saw the Dodgers beat the enemy 2-1 on a pitching gem by Clayton Kershaw. 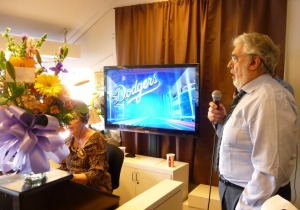 Placido Domingo practices national anthem right in front of me with Dodgers' organist Nancy B. Hefley

Speaking of handshakes and great voices, I got to greet another all-time classic in Placido Domingo who stood a couple feet away from me as he practiced his special rendition of the national anthem. It was also good to say hello to new ESPN broadcast partners and old friends Orel Hershiser and Bobby Valentine who stopped into the Vin Scully pressbox dining room just like it was old times around here. I asked Orel how was his golf game and he said that he had quit 5 years ago replacing it with poker. I guess it’s much less taxing on the body? ‘Bulldog’ also told a few Fernando Valenzuela stories before the legendary lefty threw out the ceremonial first pitch.

But before any first pitches of the season, I had to hustle down to the Dodgers’ locker room to get you some player’s thoughts and that’s where I ran into former L.A. first baseman Steve Garvey who still works for the club. The irony of seeing ‘The Garv’ here was that we had both just played in the Kraft Nabisco Pro-ams the last 2 days, so it was time to get him to say a few words on both golf and baseball… 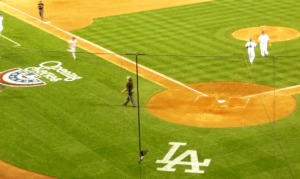 [
After Garvey I saw Dodger closer Jonathon Broxton just sitting in front of his locker casually watching the Angels-Royals game on TV. So I messed with him about a nice tan and his emotions going into the new campaign?…

And then new Dodger leftfielder Tony Gwynn, Jr. wandered over to his locker and I thought it would be the perfect time to introduce myself for the first time. And it wasn’t surprising to see that he was a chip off the ol’ block, not only sounding like his Hall of Fame father but with that same great attitude…

And the last remaining Dodger in the area (before they would have to kick me out of the locker room as the game was fast approaching) was tomorrow’s starter and the man with the shiny new contract extension, righthander Chad Billingsley. And since I never did get to spring training in Arizona this year, I had to at least comment as well on his beautiful new tan (which he gladly accepted)…

So after Kershaw outdueled Giants’ ace Tim Lincecum for new manager Don Mattingly’s first official MLB win, here’s what ‘Donny Baseball’ told us right after the game (and I had to ask if he gave any Vince Lombardi type speech to help his team win?)…

and then I went to starting Dodger catcher Rod Barajas to get his thoughts on the game and what it means to his new skipper and to beat their rival as well?…