The Dodgers couldn’t complete the call at AT&T Park 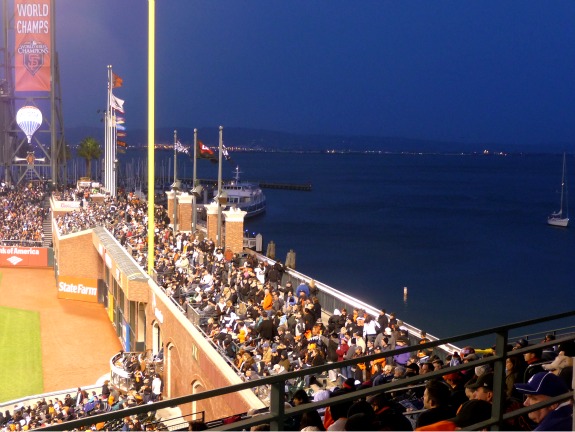 McCovey Cove is as good as it gets

Just hours after Barry Bonds became a convicted felon for obstruction of justice, his old team the Giants hit 2 legitimate homeruns on a balmy San Francisco 54 degree night at the start to beat the Dodgers 4-3 and take the series 2 games to 1. Jonathan Sanchez outdueled fellow lefty Ted Lilly for his first win of the early season while Lilly’s record fell to 0-2 and his ERA dropped to an even 6. 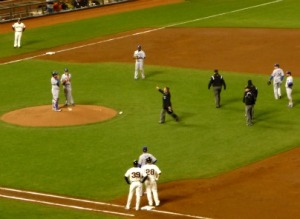 Dodgers and Giants get umpire warning

Ted (no relation to me-as far as I know) was involved in a mini altercation when hitting Giants clean-up man Buster Posey on 2 straight at bats, which caused home plate ump Greg Gibson to send warnings to both managers. Nothing further developed from there and afterwards, Dodger skipper Don Mattingly and Lilly took questions from us on that matter and the rest of what went on during this series finale… 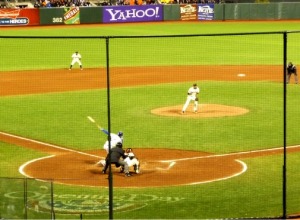 The Dodgers simply left too many men on base the last 2 nights including my picture of Matt Kemp striking out to end the 7th inning after a 2 out single by Andre Ethier. It was the first time that Kemp went 0 for 4 since April 5th while Ethier extended his hitting streak to 10 games. L.A. catcher Rod Barajas did hit his 2nd homer of the series with a man aboard in the 4th inning off of Sanchez but as he told me afterwards, it just wasn’t enough…

So the Dodgers head home for a weekend series with the St. Louis Cardinals while I head home for some playoff action. Friday night in Anaheim with the Ducks already down a game to Nashville in the first round of their Stanley Cup run. And then Sunday afternoon, the Lakers open their post-season quest for a 3-peat (please don’t sue me Pat Riley for using your patented term) vs. New Orleans after barely earning the #2 seed in the West when beating the Kings in overtime in what is almost a given final game ever in Sacramento. The Lakers beat the sting-less Hornets all 4 games this season, so no excuses in the opening round guys and let the fun begin!