Who’d a thunk it that Marc and not Pao Gasol would be the brother to take game one of their Western Conference opener (Memphis at top seed San Antonio) and for Marc it was the first playoff win in Memphis Grizzlies history. Meanwhile big brother Pao was trying to (once again) peel the label of ‘soft’ off of himself against the much smaller New Orleans Hornets who held him to just 8 points on 2 of 9 shooting and 6 rebounds in a 109-100 stunner at Staples. And Chris Paul turned into CP3 the great again with 33 points, 14 assists and 7 rebounds helping roundout the first time since the current playoff seeding was in place (1983-84) that the top 2 seeds in a conference lost their first round home openers together. The Lakers sort of took over where they left off in the past few weeks with another lackluster performance but no stat stood out like the points in the paint number that little New Orleans dominated by 18 over the downtown L.A. skyscrapers who apparently never got their wake up calls for the early 12:30 start? The Hornets quickly jumped out to a 12-4 lead before the Lakers only go-ahead (10-0) run of the entire game wore out and N’Orleans took an 8 point advantage at the half. And that was when Kobe Bryant had a little collision with one of the big bucks courtside seats which made him woosy from a stiffened neck (which we didn’t know the severity of as he laid there for a couple of minutes before being helped back to the locker room). 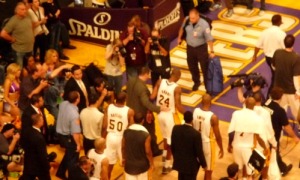 But little can keep Kobe away from doing his thing as he scored 18 of his game-high 34 in the 2nd half but didn’t get enough help from his friends to pull it out. Also late in the 2nd quarter Pao Gasol’s face collided with ex-teammate DJ Mbenga and it opened a cut reminiscent of a boxer’s just below his left eye. Well he has a great cut man in trainer Gary Vitti but they couldn’t draw as much aggressiveness out of Pao today as they did blood (as you can see in the picture). 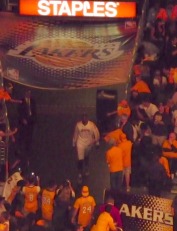 Not exactly a Willis Reed entrance, Kobe Bryant returns for the 2nd half

After the game, Kobe spoke with us about all of his emotions and disappointment in losing to a club who his guys had beaten in all 4 other attempts this season…

The other L.A. ‘Big’ Andrew Bynum who only had a so-so game for him lately with 13 points and 9 rebounds in almost 26 minutes but he was his usual candid post-game self when it came to what his team was doing wrong and how to fix it?…

Another Lakers guard Shannon Brown came off the bench with 8 points and several other mental points for me in front of his locker as he tried to explain this loss..

and so it’s on to game 2 here on Wednesday night and the Lakers will likely be close to double digit favorites again but will they be doubly tough when they need to be? Not even the Zen Master knows that answer but we’ll see if Phil Jackson knows the right buttons to push to get his team back to championship form? Next up for me, the hockey Kings try to take a 2-1 series edge on visiting San Jose on Tuesday night.