WoW, What a game one Stanley Cup finals finish in Vancouver, eh? 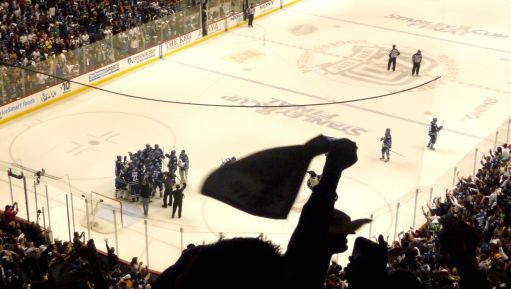 I thought the Canucks and Bruins might still be playing game one of the Stanley Cup finals as I’m writing this, but thank God for journeyman Rafi Torres goal with just 18.5 seconds left in the 3rd period to send this city of Vancouver into an even louder frenzy then they were already in with that big 1-0 win. Neither team could figure out the other’s goaltender with Boston’s Tim Thomas having to make several more difficult saves than Roberto Luongo of the Canucks but of course ‘Lou’ will take the shutout any way you look it at!

The game had as much intensity on and off the ice as any that I’ve seen in years (and that’s more than I’d like to count). And in the first game that I’ve ever witnessed in Vancouver, the crowd really played their part nicely-keeping the building rocking for most of the night (except for when their Canucks were killing 6 penalties when you could feel the nervousness in the air). Of course both clubs were 0/6 on the power play which is hardly a shock to Boston’s followers with their ineptness with the man advantage-and it was Thomas that kept them in the game even though they had more shots on Luongo for the night. 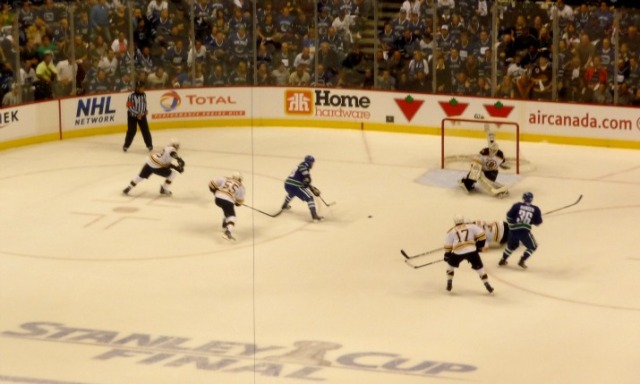 Torres gets a perfect pass for the easy lone goal

After the game I headed downstairs for my first Canadian-style Cup Finals locker room experience and really felt what this game had meant to both clubs. I first hustled into the Bruins room and quickly got a few words in with Thomas as he laughed when I asked him if the way they had lost might have a negative affect on his guys? (you can hear his response below). I then ran over to the Canucks room and spoke with the Sedin twins, defenseman Kevin Bieksa (who scored the big game and series winner vs. San Jose) and then into the main interview room to get a couple of questions in for Luongo, Ryan Kessler, and the unlikely hero in Torres. (by the way, not a bad picture I took of the pass by Jannik Hansen to Torres to win this thing-like I always say ‘timing is everything!) 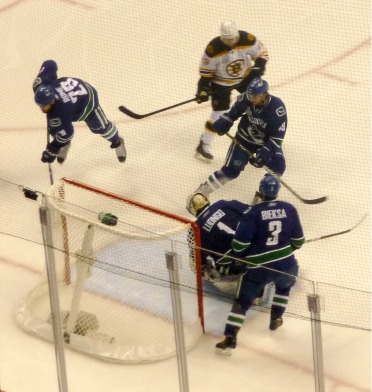 Luongo and his dee protecting the shutout

I also made sure to reach out to my old friend and ex-Ice Dogs forward Darryl Williams, who’s now in his 2nd year as an assistant coach with the Canucks. Willie played in Long Beach for most of the entire 5 years that I was the play by play voice of the now defunct IHL Ice Dogs. And I not only wanted to see him after his first Cup finals experienece but share his feelings with you as a player who never made it to the NHL but who now gets to enjoy the fruits of his labor as a coach…and believe me he was smiling from me to you!

The following is my postgame audio as each club tried to figure out what had just happened so suddenly to end a scoreless tie after the first 59 minutes and 41.5 seconds… 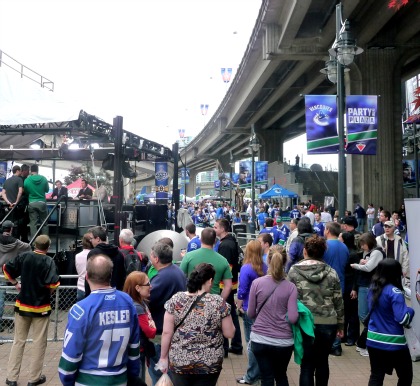