On the night when the Kings take Doughty off the doughtful list, I give you one very happy Hall of Fame hockey announcer. 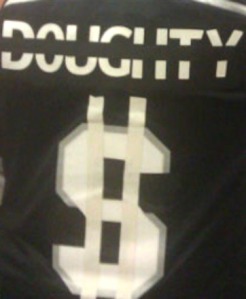 The news just came in that talk is definitely NOT cheap $$$ as the L.A. Kings have verbally agreed to a new 8 year-56 million dollar contract with 21 year old all-star holdout defenseman Drew Doughty making him the King of Kings (I guess it was worth his wait, eh?).

And I decided not to wait since it’s the perfect time to post my Bob Miller sitdown interview from yesterday right now. We discussed everything about his upcoming 38th season (one of the club’s most promising in years) as the voice of the Kings including Doughty’s holdout and how it could’ve impacted the team? But that’s old news now and tomorrow night (Friday) is the final game at Honda Center for both the Kings and Ducks before they head to Europe without Bob and he’ll explain why if you listen to our chat by paying just a little attention…