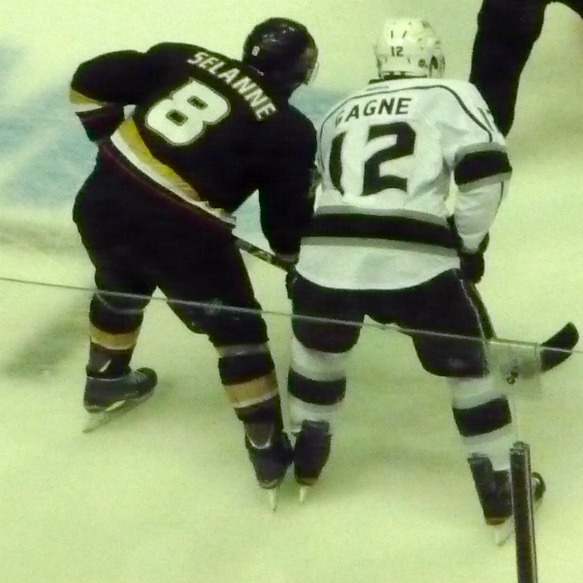 The Ducks lost to the Kings 3-1 at Honda Center last night in their final So-Cal preseason game before flying to Finland this morning. On that flight is ‘The Finnish Flash’ Teemu Selanne who scored the Ducks lone goal before he sees his old club Jokrit on Tuesday in Helsinki for the team’s final preseason match before opening their real season with games against the Buffalo Sabres in Helsinki on Oct. 7, and the New York Rangers on Oct. 8 in Stockholm, Sweden.

Selanne is back for a 19th NHL season and how about these career stats: he had 31 goals and 80 points last season, entering this season with 637 goals, the most in the NHL by a Finnish-born player and No.14 all-time. Teemu is 3 goals behind No. 13 Dave Andreychuk, and 9 goals from No. 12 Jaromir Jagr. His 1,340 points are No. 27 on all-time list, but just 54 behind No. 20 Luc Robitaille and 58 away from Jari Kurri, the all-time NHL point-producer among Finnish-born skaters.

with Teemu on Stanley Cup Night in Anaheim 2007

The Ducks PR gurus Alex Gilchrist and Steve Hoem get my biggest props of the night, being kind enough to give me special late post-game access to the 41-year-old future Hall of Famer who will have to turn away many of the over 150 interview requests back home (so you see why I really appreciate him giving me a few minutes before the long trip). In our chat, we talked about his newly repaired knee and what he expects to see when going home to Finland. And let’s not forget Selanne’s entire farewell tour this season which will also find him back in Winnipeg on December 17 where his great North American journey all began as the 10th overall selection in the 1988 NHL Draft by the Jets and then scored 76 goals, shattering the NHL rookie record …

Randy Carlyle with Ted Sobel on Selanne’s return to Finland: