Tiger Woods tells me ‘ABSOLUTELY’ he can surpass Jack Nicklaus with 19 major championships, but will he?

Hollywood and Highland is turned into a practice putting green

Tiger Woods was back in his hometown of L.A. yesterday (Tuesday) to promote his Chevron World Challenge (which I’ve attended every year when in town) in early December at one of the most prestigious country clubs on the planet-Sherwood CC in Thousand Oaks.

The Tiger Woods Foundation took over the Hollywood & Highland Center in the heart of Hollyweird for a few hours to hold their pre-tournament press conference followed by a putting challenge with 4 fans given the chance to putt with Tiger. And the lucky winner (after some good-natured ribbing and laughs) received passes to walk inside the ropes with Woods during the opening round of his tourny on December 1. 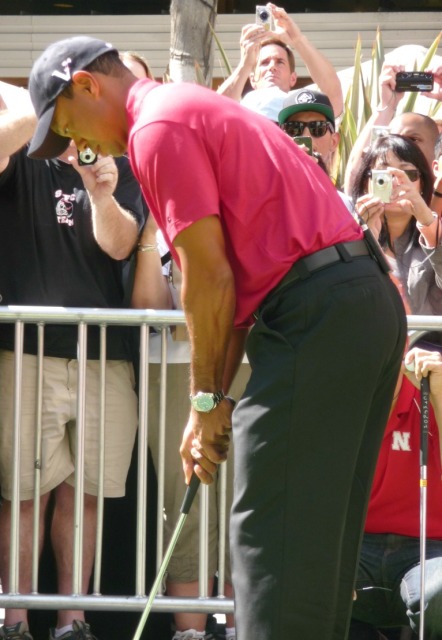 Possibly the greatest clutch putter ever displays his perfect grip

Tiger is not only the host of the tourny but also a four-time champion, and after the putting fun he was kind enough to stop and talk with me about his interactions with the local fans and what it would mean to win his own event for a 5th time? (he hasn’t won anywhere in almost 2 years and is now ranked an almost unthinkable 52nd in the world) 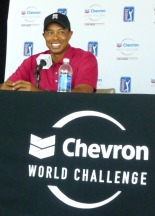 Tiger laughs at and with me about my 'hot dog' question

Tiger’s foundation President/CEO Greg McLaughlin led off the presser by announcing the 2011 Chevron World Challenge field and then Woods spoke with us media types and I got several questions in. Including if he can still pass Jack Nicklaus’ record of 18 major championships (Tiger’s at 14), and if he still likes hot dogs after Sunday’s incident on the green at the Fry’s Dot Com tournament (where he finished T-30) when a fan threw a dog at Tiger on his way to being arrested near the 7th green. And you think you had a weird Sunday? 🙂

Tiger Woods 1on1 with Ted Sobel: