Donovan, Coach Bruce Arena, and Beckham are all smiles after winning MLS Cup

It was the 7th time that the L.A. Galaxy played in the MLS Cup championship game but the first time in front of their home fans and they sent them all home to party after a 1-0 win over the Houston Dynamo who seemed to play more not to lose throughout this one. The lone goal came in the 72nd minute off the foot of Landon Donovan with the 2nd assist credited to his ‘buddy’ David Beckham who was all smiles afterward (despite his sore hamstring, back and whatever else is bothering the aging soccer star). 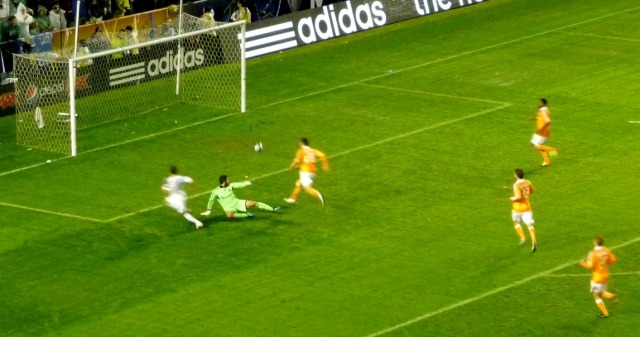 Donovan's goal wins it for L.A.

So now the big question is will Beckham go out on top either retiring all together or possibly playing back in Europe next year? And remember that he still hasn’t ruled out wearing the Galaxy uniform again so that is still to be determined.

Beckham's last chance to 'Bend it' in MLS Cup

What he did tell me after the game was strongly intimating that he’ll likely remain a Los Angeles resident with his family very happy in So-Cal. And he’s been such a gentleman that it’s a pleasure to keep him around…whether that’s on the soccer field any longer is anyone’s guess but may David’s decision work out whatever his best for his health and family. 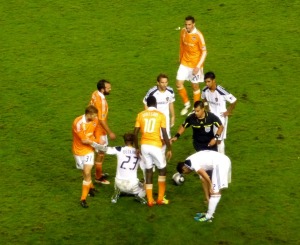 Beckham on his last legs minutes before celebrating

On a personal note, attending this championship game completes my 2011 Media Grand Slam’ plus 1. I ended up reporting from the Super Bowl, NHL Stanley Cup and NBA Finals, and the World Series all in the same year and I guess it was only fitting that the final game was actually in my own city with the L.A. Galaxy crowned the champs! It all starts again in the New Year with the Rose Bowl but until then, it was a full season to remember for sure with sounds and pictures placed here for all to enjoy. Thanks for sharing the ride and let’s do it again next year (at least some of them!)… 🙂 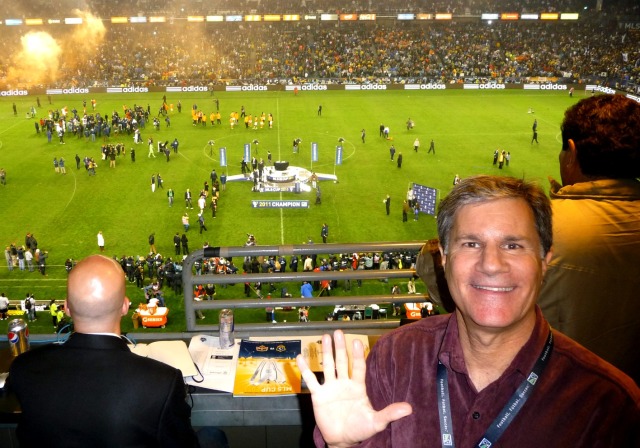 It's a goodnight from Home Depot Center and another L.A. Title