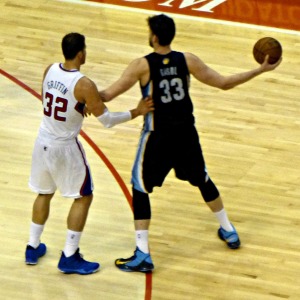 At least one Gasol is enjoying the Staples floor lately!

The Clippers got barbequed Memphis style by the team they’re trying to overhaul for the 3rd seed in the western conference playoff race. The Grizzlies won it going away 96-85 by shooting over 54% on the night and better than 65% over the first 3 quarters. The points in the paint stat was well in favor of the Griz 46-30 and they held the Clips to just a 43% shooting night.

Chris Paul led ’em all with 24 points while Blake Griffin added 22, but that was far from enough against the Grizzlies 5 guys in double figures including Marc Gasol’s 21 points and 5 steals (which equaled the entire L.A. squad). Needless to say, it was a quiet locker room afterward but I got what I could from the Clippers who continue to struggle against the top teams in the west as of late…something they’ll need to correct by playoff time or else make it another short post-season.

Jamaal Crawford who shot an awful 1-10 from the floor tonight:

Grant Hill sums up a tough night that he could only muster up 2 points in 12:30 of playing time:

And DeAndre Jordan was in a total loss for words after this one:

The good news is the Clippers get a few days to practice up for the collapsing N.Y. Knicks who lost by only 23 in Denver tonight and their 29 pt. blowout loss at Golden State on Monday night. You can hear the Clips try to beat up on the possibly Melo-less Knickerbockers on KFWB Newstalk 980 on Sunday starting at 11:30am.