Inbee Park is hoping to kiss another trophy tomorrow

World #4 Inbee Park is playing at least up to her Rolex world ranking if not even better with back to back 67’s while increasing her lead over USC grad Lizette Salas to 3 shots going into Sunday’s final round of the Kraft Nabisco Championship. The winds were not as much of a factor today as first thought so they just went out and played their games with Park putting herself in a great position to win her 2nd major and first in 5 years on Sunday.

Here’s my post-round chat with Inbee who was all smiles and ready for the big challenge: 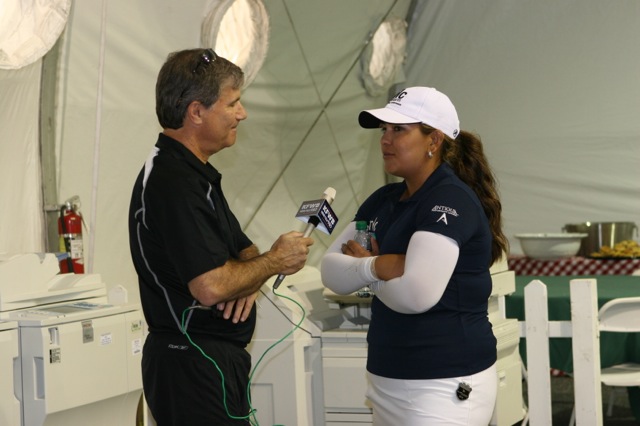 Meanwhile Salas who’s now ranked 40th in the world was disappointed in missing a birdie putt on 18 and also in her overall ball striking on Saturday but had a great attitude about the entire day afterwards…And it certainly was fun introducing Lizette onto the 18th green in which I must admit that I gave her a little extra ooomph for her local throng who’ve been following her throughout:

Behind Lizett who’s at 9 under par overall—there’s a 6 pack of players who are 6 shots off the lead so it’s really up to Park or Salas to win this thing tomorrow. Hope to see you out there when it’s time for the champ to jump into Poppy’s Pond.