Sounds of the game Clippers-Grizzlies #2 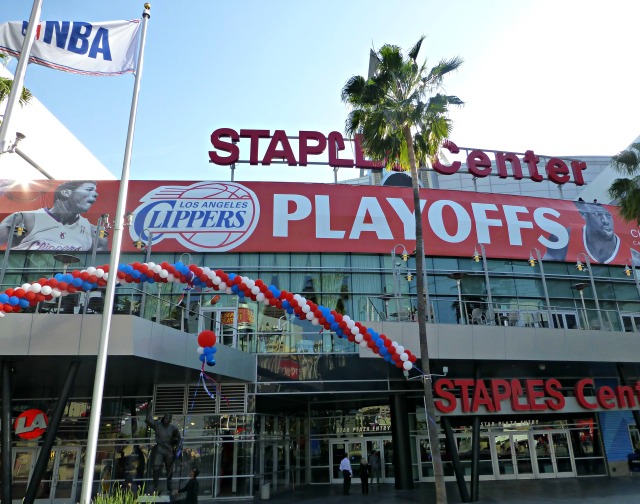 Setting for game 2 at Staples Center

As you can imagine it was all smiles in the Clippers locker room after they nipped Memphis 93-91 on a driving Chris Paul shot for the ages at the buzzer and for a 2-0 L.A. series lead. Paul was guarded tightly all the way by defensive guru Tony Allen who was mostly in his jock (so to speak) but CP3 found another way to score in the clutch something I reminded “Mr. Big Shot” Chauncey Billups afterwards that he may’ve lost that nickname on this club…and he had no problem giving it up to the best point guard on the planet right now who also scored his team’s final 8 points.

The Clippers tried to give this one away a few times—leading by their game best 12 points with 9:50 to play and then blowing a 7 pt. lead with about 4 minutes left. The Griz tied it twice in the final 1:37 but when you have CP3 all is usually fine when you need to win it at the end…and he pulled it out again.

Some of the keys to this one were the Clips franchise best 10 blocked shots (Memphis had 5 of their own). Paul scoring a team high 24 along with 9 assists (something I asked coach Vinny about after on why Chris doesn’t shoot more a little earlier so that they don’t get into these kinds of predicaments? Blake Griffin came back with a huge effort of 21 pts. on 9/18 shots and 8 rebounds. And Jamaal Crawford who insisted to me afterwards that he didn’t have a chip on his shoulder after getting snubbed for the NBA 6th man trophy…but whatever it was, he was on fire early with 13 of his 15 points in his first 9 minutes of action in the opening half when he hit his first 6 shots. The Clips also did a better job throughout in the points in the paint category helping their cause. 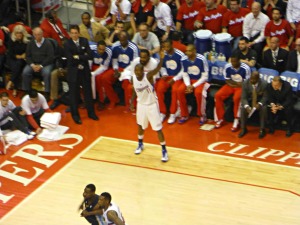 Crawford may be thinking give me the damn ball and also that 6th man award while you’re at it!

The following are my postgame Clipper interviews along with several preview thoughts for games 3 and 4 in Memphis on Thursday and Saturday (which you can hear of course on KFWB Newstalk 980).

DeAndre Jordan who had 4 of those 10 blocked shots, a stat that I totally surprised him with:

Chauncey Billups who doesn’t have to be ‘Mr. Big Shot’ anymore:

Lamar Odom on being the guy with 2 rings and enjoying another shot at one:

Willie Green, who didn’t get any minutes but he’s always great to chat with while giving some solid insight to everything:

A few fun notes during my postgame locker room sound gathering…while I was interviewing Willie Green, his nextdoor (locker) neighbor Chris Paul walked up and was listening in to our chat. Right after I gave Chris a congratulatory fist pump and told him it’s been awhile since any shot has brought me out of my seat–literally. And he said with a huge smile,”Really???, did you really jump out of your seat?” And I told him yeah, and that I almost made it rim-high but still can’t dunk and never will! He laughed and said that was cool. But it was much more cool to see one of the all-time greats do what he did in person and in such an important game. Jamaal Crawford then made it into the seperate media newsconference room along with Blake and Chris at the same time something that I got a laugh from him when I said he’d get to enter through the back (or Superstar) door. And then after their newser, I jokingly asked Griffin if he’d bring me back some Memphis BBQ following his 2 games there? He laughed and said he’d love to but he won’t be leaving his room and that he won’t be eating that stuff on this trip…in which I replied, wish it was me instead, just sayin’. The ribs there are amaaaaazing! Now it’s up to the Clippers to make sure that the Grizzlies don’t enjoy their home cookin’ as much as I’d like to be the one to! 🙂