Exit interviews in Clippers camp are over so now who’s exiting? 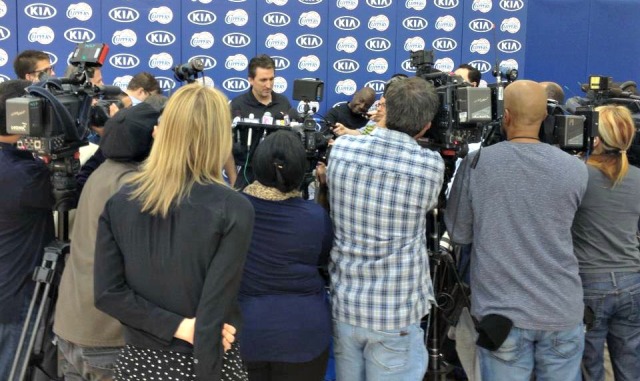 Their regular season team records were great but the Clippers season ended on a sour note when their first round playoff series with the Memphis Grizzlies came crashing down in 6 games after a major meltdown with a 2-0 series lead. So now what? Chris Paul is their number one-major-huge-main priority (UNDERSTATEMENT!) and then there’s this other free agent…as in head coach Vinny Del Negro, who’s made strides in his job over the past few years but is that good enough for the Clippers and their new expectations?

These and many other off-season questions need to be answered and it’s up to the front office including V.P. of basketball operations Gary Sacks to find them.

We spoke with Coach Vinny and Mr. Sacks this morning and got some general answers to the season-ending stuff but the future is unclear and you’ll more understand why when you listen to the following…

We can only assume that by the end of this week we’ll have a clearer understanding of Coach Vinny’s future here, but we may have to wait until at least July 1 to learn of CP3’s fate? Will he stay here or opt for different pastures, which can’t be any greener (as in cash) at least with his guaranteed extra season of the bigger bucks with the Clips. And one key thing to keep in mind is if Paul does re-sign here…this would likely be the first time that the club would need to pay luxury taxes for some true depth on their roster…and remember the owner’s past history with money meaning if that doesn’t change, the future is very much in doubt…so stay tuned!