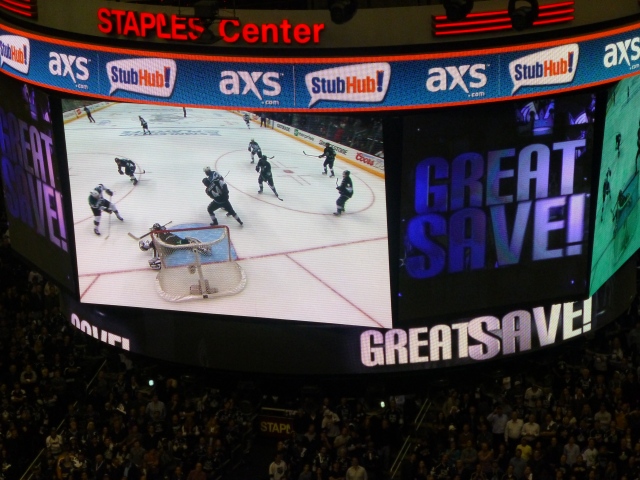 The big game 5 (which was played more like a game 7) goes to the Kings 3-0 over the Sharks in a hard-fought war that saw L.A. win the battle in many ways including out-hitting San Jose 51-24 and 35 of those were by the forwards. And the guy who led ’em all was captain Dustin Brown who set the tone being the human pinball machine that he can be with a game high 7 hits although I thought I counted that many in the first period alone!

The Kings also finally played a complete 60 minutes which we haven’t seen in the past few games (and not even close) and importantly got off to the early lead on a late first period goal by Anze Kopitar who’s slam dunk on the doorstep proved that he really isn’t on any milk cartons afterall coming up big when his club’s best players needed to be just that. Kopi played a game-high (for the forwards) of 22 minutes and they certainly were quality time spent. Included in that best player group was Drew Doughty who was all over the ice and while taking hit after hit from the desperate Sharks but the Kings all-star d-man wouldn’t bend or break.

Oh, and there’s that guy Jonathan Quick who’s now stopped just under 95% of the shots on his goal while extending his club record to 7 playoff shutouts and passing Kelly Hrudey as the Kings all-time postseason win leader with 27.

The sounds of the postgame are ahead from a confident Kings locker room:

The way this series was shaping up I felt strongly that the winner of tonight’s game would take this series…so before the game, I asked the Kings P.R. staff to find me the percentage that Game 5 winners in a 2-all series go on to win an NHL 7 game playoff series so they called the famed Elias bureau of statistics. And the number I got back was 177 of the 224 teams went on to win those series for a solid 79% (something that Ducks fans don’t care to hear). So the defending Stanley Cup champion Kings have now won their last 13 on home ice and are now in the driver’s seat up 3 games to 2 and with their compass aimed for San Jose on Sunday for a chance to end this series and a 2nd straight trip to the Conference final. And folks, that ain’t all bad…unless you’re a Sharks fan of course! 😉