Puig goes 0-4 and the Dodgers hit the skids again 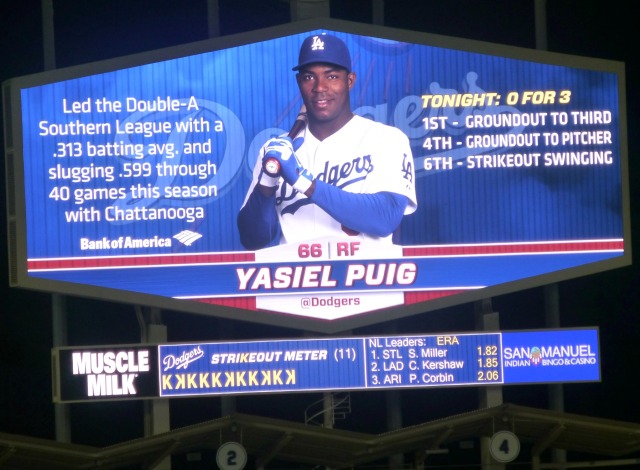 Expectations are tough to live up to especially after just two big league games and the Dodgers hopeful new star of the future Yasiel Puig went hitless in his four at bats including two strikeouts as his guys lost to the Padres 6-2.

Dodger starter Clayton Kershaw allowed 3 runs on 7 hits along with 9 strikeouts in his 6 innings of work. But that fell short of San Diego righty Jason Marquis’ 2 run, 2 hit outing and he took a no-hit bid into the 6th inning when Skip Schumaker’s 2-out double ended it. And finally Marquis was knocked out of the game after a 7th inning homer by left fielder Scott Van Slyke.

But the spotlight was on Puig who had one of those nights that he’ll have hundreds of times over the next decade plus, something he’ll have to learn to accept. He looked quite dejected in the dugout after striking out looking in the 9th inning. But he seemed fine when we spoke to him in the clubhouse later. It’s the first time in many moons that I recorded a player’s Spanish speaking interview but I thought you might like to hear his tone of voice and words (in English from his interpreter) including when we might expect to get an English speaking chat from him? Don’t hold your breath for that happening anytime soon but at least he smiled when saying that.

The following are my sounds of the postgame…

Dodger LF Scott Van Slyke who belted his 6th homerun in this one: 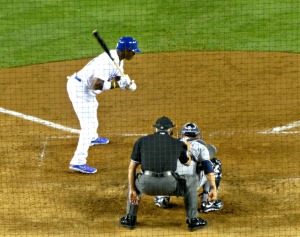 Dodger RF Yasiel Puig in Spanish (with his English interpreter):

And don’t look now Dodger fans, but it gets much tougher from here with the first place Atlanta Braves invading the Ravine for the next 4 days and they’re riding high on a 5 game winning streak. Of course I’ll miss the Thursday night opener between Zack Greinke and Tim Hudson as I’ll be back at Staples Center for the hockey Kings big game 4 vs. the Chicago Blackhawks.

FYI-while standing in the Dodger clubhouse tonight I noticed an old-school creamsicle colored Tampa Bay Buccaneers hat inside Greinke’s locker and I asked him about it. He’s an Orlando guy and grew up liking the Bucs but of course not old enough to remember their worst years in that awful color when they were winless under coach John McKay. That was the team that McKay was famous for his reply when asked about the team’s execution?…:I’m in favor of it’! At least Zack’s Dodgers aren’t that bad yet, but they’re still mired in last place which is embarrassing enough for the highest payroll club in baseball. 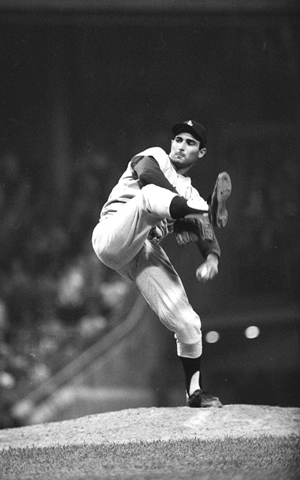 Sandy’s back where he belongs

And one great note of interest that I learned tonight is that Sandy Koufax will be here for the Dodgers old-timer’s game on Saturday night with player’s introductions starting at 5:20pm. That’s a can’t miss one for me and hope to see you here as well!