Old Timer’s night at Dodger Stadium beats the real game for me! 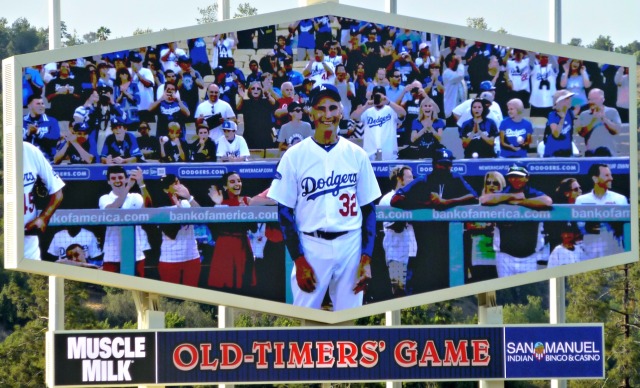 It was another perfect night for a ballgame in L.A. and I’m not talking about the Dodgers and first place Atlanta Braves. For me it was the guys of yester-year that grabbed my attention more than the game’s current stars (at least for one day). If you grew up in the 60’s and 70’s as a Dodger fan like I did, all you have to do is mention names like Koufax, Wills, Sutton, Cey, Garvey, Lopes, Russell, and Buckner and I’m there in a heartbeat! Throw in others like Fernando, Newk, Sweet Lou, and one of my boyhood idols Ron Fairly and my sentiments grow even stronger.

It was the first ‘Old Timer’s’ game played at Dodger Stadium since 1995 and to me it was a great hit…or even a grand slammer. It celebrated the 50th anniversary of the Dodgers first World Series sweep of the Yankees and a solid roster from both squads was on hand along with those who faced each other in the 1977, ’78, and ’81 series. Let’s face it, baseball’s tradition and history is what makes it standout over every other sport on the planet and younger fans should embrace that if it’s to last throughout the ages the way it needs to be remembered-with special passion.

Fernando turns back the clock

Here’s the complete roster (as provided by the Dodger P.R. staff) who donned their old jerseys to refresh memories that will never fade for any of us who lived it:

I got the opportunity to speak to many of them so enjoy going down memory lane with me (whether you lived it or not!):

Koufax during batting practice ready to shag some balls

Sandy Koufax didn’t say much as usual but he did compare the Dodgers new sensation Yasiel Puig to Fernando-mania and afterwards it was announced that the 2nd Koufax Bobblehead Doll night will be on June 27 vs. the Phillies-maybe HE will be more talkative?):

Tommy Lasorda (who first greeted old mates Dick Tracewski and Pete Richert) with Fernando Valenzuela as Tommy tells his former lefty right in front of me that he’s starting tonight. I spoke with both of them including asking Fernando to compare Puig-mania with his days in the spotlight: 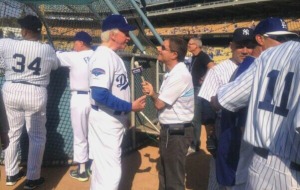 Chatting it up with HOF’er Sutton

Hall of Fame pitcher Don Sutton who had his ‘Bobblehead Doll Night’ last night as he’s in town still doing radio play by play for the Braves:

Wills at 80 still looks good in the Dodger infield

Should be Hall of Famer Maury Wills who’s speed on the basepaths changed the game forever and he’s still teaching base-running to the current Dodgers, tells a great not well-known Koufax story that you can’t miss:

Ron Fairly who roamed first base and right field at Dodger Stadium in the 1960’s and had one of the smoothest swings you’d ever see. This was the first time I’d ever interviewed him and I told Ron just how special that was right off the bat:

The longest running major league infield was together again with Garvey, Lopes, Russell and Cey back on the field where they belong for the ages and I spoke with three of them: 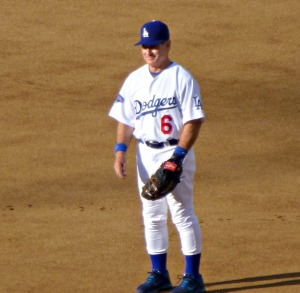 ‘The Garv’ back at first base 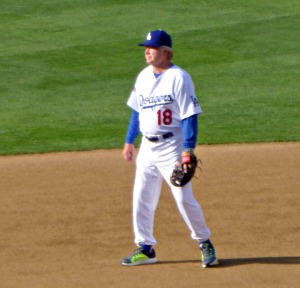 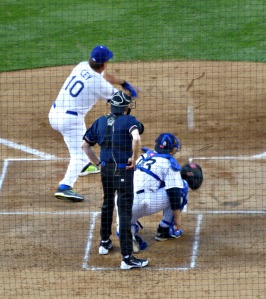 ‘The Penguin’ swinging for it all, like old times

Bill Buckner who’s #22 was stolen by Clayton Kershaw (LOL) and was one of the Dodgers consistent left handed hitters during his time in the 70’s (and a guy who I got to know in those early days as you’re about to hear):

Lefty Jerry Reuss who had several excellent seasons in his 8 years in Dodger Blue:

Former Dodger and Yankee Darryl Strawberry who returned home to his native L.A. where I once covered him like a tarp:

Don Newcombe who at 87 years young is simply a Dodger legend and always special to chat with:

Lou Johnson a Dodgers World Series hero who still works for the club:

Hall of Fame reliever Goose Gossage and his Yankees battery-mate Rick Cerone recalling one of the scariest moments in World Series history when Ron Cey was beaned in the 1981 Fall Classic:

Vin Scully introducing a few of the all-time Dodger legends like Koufax, Fernando, and Lasorda:

The few innings these guys tried to play was worth the time and then the current Dodgers went out and lost 2-1 to the Braves while I watched the hockey Kings reign as Stanley Cup champions end in Chicago in the 2nd overtime 4-3. A bitter-sweet night that makes sports why we follow it…and it’s right back to the stadium on Sunday.