We’re midway through the ‘ULTIMATE GRIND’ at The Open!

Welcome to the only place in the world to hear the ‘totally un-edited’ post round interviews from the top names playing at Muirfield. 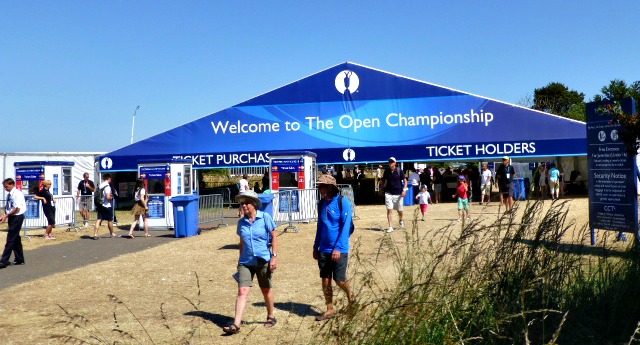 Several players told me after round 2 that this was the toughest grinding round of their careers as day 2 finished at The Open Championship with 49 year old Spaniard Miguel Angel Jimenez enjoying a one shot lead at 3 under par over Americanos Tiger Woods and Dustin Johnson, the U.K.’s own Lee Westwood and Henrik Stenson of Sweden.

With no time to write much here today…just thought I’d post all of my after-round interviews and let you listen to whomever suits your fancy. Enjoy!

Miguel Angel Jimenez a fun and fancy-free character who enjoys his big cigar and red Ferrari, and as he told me of course also having the midway lead at The Open (and sorry for the few seconds at the start of annoying audio system problems):
Miguel Angel Jimenez with Sobel et al after 2 under 69 in 2nd round at Muirfield

Tiger Woods who’s putting and iron play make him the prohibitive favorite as always even though he hasn’t won a major in 5 years (something I asked him about again-what else is new?):
Tiger Woods with Sobel et al after round 2 at Muirfield

Lee Westwood who’s also looking for his first major and he smiled when I asked him if he believed in karma after Scotsman Andy Murray finally broke the long U.K. drought at Wimbledon so why not him this week here?:
Lee Westwood with Sobel et al after 3 under 68 round 2 at Muirfield

Henrik Stenson who might be the most unlikely of the names near the top but he could care less about that:
Henrik Stenson after round 2 at Muirfield

Zach Johnson the former Masters champ and first round leader who told me he was thrilled with his 2nd round 75 with the much tougher afternoon tee time and still just 2 shots back:
first round leader Zack Johnson with Sobel et al at midway point at Muirfield

Phil Mickelson who’s still looking for his first Claret Jug and battling like he’s never had to battle before:
Phil Mickelson round 2 with Sobel et al

Adam Scott the reigning Masters champ who’s quietly only 4 shots behind and then told me how that green jacket fits his life perfectly but it’s also very old news now:
Masters champ Adam Scott with Sobel after 2nd round 1 over 72 at Muirfield

Ian Poulter the outspoken Brit who’s never won a major but is feeling pretty good about his chances this weekend:
Ian Poulter (UK) with Sobel et al after 2nd round at Muirfield

Brandt Snedeker the likable American who was right there until blowing up on the back 9 with a 43 and his 8 over par day puts him 8 shots behind the leader and T-39:
Brandt Snedeker with Sobel et al after disappointing 2nd round at Muirfield 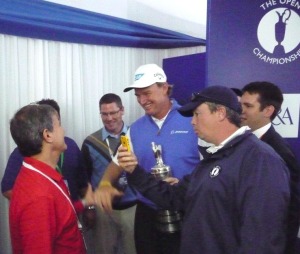 Defending champ Ernie Els who last year was all smiles with me while holding his beloved Claret Jug for a second time, but today he walked up to the mic and asked me what did we want him for after a very disappointing bogey-bogey finish and at 6 over par overall:
Ernie Els defending Open champ with Sobel et al after 2nd round at Muirfield and he wasn’t in the mood to talk after finishing with back to back bogies

Sergio Garcia the still major-less Spaniard who made the cut by 2 shots and starts here by praising his playing partner Lee Westwood:
Sergio Garcia with Sobel et al after fortunately making the cut

Justin Rose the Brit and current U.S. Open champ who’s ranked #3 in the world but missed the cut here by 2 shots:
Justin Rose with Sobel et al after missing the cut at Muirfield

And finally Sir Nick Faldo the 2-time Open champ who’s the perfect guy (as a TV analyst) to ask about how this tournament sets up for the weekend? He also told us that this is likely his last British Open as a player:
2 time Open champ Nick Faldo with Sobel et al analyzes why he played maybe his final Open and more

Winds are supposed to come out of the east in round 3 which Ian Poulter told me means that the guys will be aiming towards many bunkers and hoping the ball will land in a safe spot. Good luck with that! And thanks for joining me again at another wild and wide open Open Championship!