Goodbye forever Hollywood Park and thanks for the Goose Girls

This is a very sad day for those who ever enjoyed the glory years of Hollywood Park racetrack. It WAS a special Los Angeles sports venue since it was founded in 1938 by who else, but some Hollywood moguls including the original Warner Brothers. But now the final curtain has fallen as the wrecking ball is scheduled shortly to destroy everything on the famed Inglewood grounds except for our memories.

The gorgeous colors of Hollypark when they cared about the place!

My father Bernie Sobel was the guy who exposed me to the thoroughbred racing game taking me to the track as a little kid. He would come home from work and sometimes turn on the radio to hear the track announcer’s calls for whatever bet he had going or just to follow the ‘Sport of Kings’ in general. Some of the great names I best recall hearing from the beginning just happen to be winners of ‘Hollypark’s’ biggest race of them all, the Hollywood Gold Cup. The legendary Seabiscuit won the inaugural running in 1938 but who can ever forget the likes of Citation, Swaps; Round Table, Ack Ack, Quack, and of course 3-time winner Native Diver. Those were the names that stuck in my mind during my dad’s life which suddenly ended in 1972. 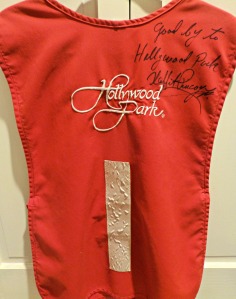 I’ll never forget the last time my father took me to Hollywood Park. It was closing day of the 1972 meet which meant in those days the running of the Grade I Sunset Handicap. He loved a horse named Typecast (who like Secretariat had Princequillo bloodline) in the last feature race we would ever share at ‘the Track of the Lakes and Flowers’. It was the 7th time that Typecast would race at Hollywood that meet which is unthinkable today. And it was also the last time that the Sunset Hcp. would be run at a distance of 2 miles on the ‘lakeside turf course’. Well my dad was all smiles when Typecast was one of only 3 females to ever beat the boys in this race. And while enjoying his winnings he took me for the last time to the old Tracton’s restaurant on La Cienega and Rodeo Road, a regular stomping ground for the racing folk which was always special to me.

Ironically the owner of Typecast, Fletcher Jones was killed in a plane accident later that November which was the same month that my dad died at the much too young age of 55. The next year the Chilean bred and stately Cougar II would win the Sunset Hcp. and then would soon become my favorite horse to ever see race in person (although watching my all-time fave Secretariat was like enjoying Tiger Woods, Michael Jordan, or Wayne Gretzky in their primes).

And you talk about irony, I was there to see Cougar win on closing day July 23, 1973. But it was the race just before that Sunset Hcp. which turned into one of Hollywood Park’s most embarrassing moments and of course somehow I was involved (more than I’d like to admit!). I had bet a one way $5 exacta ticket (instead of my usual exact box to save another $5) in the small five-horse field 7th race. I was rooting for a 4-5 finish with the 2/1 shot Knightlander with Don Pierce up, and 7/2 El Extrano with Bill Shoemaker aboard to hopefully finish 2nd. And that’s exactly how they finished, BUT for the only time in California racing history (that I know of) they read the mirrored-image photo finish incorrectly and I got screwed out of a payout that was never to be. As they say, “that’s horse racing!”. {For that complete story which was written several years ago by Daily News writer Kevin Modesti, just google Ted Sobel Hollywood Park and you’ll see it listed.} 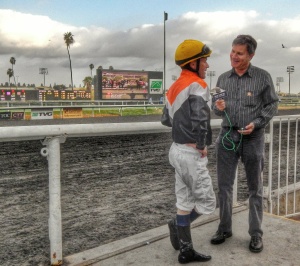 Chatting with Hall of Fame jockey Gary Stevens for the final time at the finish line.

I got the chance to chat with Hall of Fame jockey Gary Stevens after his final ride at Hollywood Park on the day before that last Sunday and he was extremely candid with his feelings on how much the constant declining of the track hurt him deeply.

Jay shares his office and it’s many memories with me.

Jay Coen has been the longtime official bugeler of Hollywood Park and it was the first time I had ever met the popular figure at most of our local tracks. It was nice to learn that he was a longtime listener of my station KFWB as you’ll hear at the end of our chat–he worked on our world famous jingle until he got it perfectly! He also gave me and Paul Olden a private tour of his little office that had only one day of existence remaining, and you can see his personal countdown on the wall behind us as he watched the ending of this very special era for him and many others.

One very important Hollypark attraction that caught my eye and ears from very early on (besides the always pretty Goose Girls) was the greatest race caller of them all. Harry Henson was a voice that if you’ve never heard before…listening to him call a race was Pavarotti-like. The perfect pitch, rhythm, and pacing. Truly a cadence that had me glued to the radio or TV and I would spend hours recording his calls holding my microphone in front of the radio just to hear that golden voice belt out “AND THERE THEY GO”! I still get chills when I hear his calls and I’m posting just a small portion of my unedited cassette’s first several days of what I believe was from the 1974 meet on KIEV Radio in L.A. As a side note, Trevor Denman may’ve surpassed Henson in my mind as the premier race caller in my lifetime, but I grew up with Harry and he’ll remain in a very special place with me forever.

Harry Henson (right) with Gil Stratton. (The only picture of Henson I could find online was on Ebay)

I’ll share a few more experiences and pictures with you here later but for now, I’m posting some pics and some of Harry Henson’s calls for your listening pleasure while you read these words. The most recent pictures were taken by my friend since college Paul Olden, who joined me for the final time at Hollywood Park so we could get some images that will remind us of the good ‘ol days. And our final Hollypark meal together was shared at ‘Whittingham’s Pub’ and oh how nice it would be too see ‘The Bald Eagle’ stroll those grounds one more time in his regal fashion. Or to see him at ‘riders up’ with Bill Shoemaker or Fernando Toro on the turf. Those are memories etched into my brain forever and I remember looking back at the track one last time as we drove away thinking (for the umpteenth time) how did we get to this pitiful stage of horse racing as we once knew it?

From ‘The Diver’ to Zenyatta, from ‘The Shoe’ to Stevens…I’ve had some incredible racing memories at Hollywood Park that will never leave my body. If only my dad were here to see this final day. Actually, maybe it’s better that he never did. It’s a major disappointment to anyone who’d ever walked the grounds and I can’t help but think if some of the late notables such as Bing Crosby, Al Jolson, and Cary Grant were still around, it likely never would’ve gotten to this point? But it’s too late now and I can almost feel those wrecking balls myself. Or as Henson might’ve called it when the horses left the starting gate running right toward the stands…”AND HERE THEY COME”! So it’s goodbye Hollywood Park forever. But OH how those words are such a waste, a feeling similar as to when they had to put the great filly Ruffian down. Empty and helpless!

Thank God we still have the two greatest race places on earth in So-Cal, Santa Anita and Del Mar. And may Trevor Denman’s voice eternally call them as he sees ’em.

Weighing in at Hollypark for the last time 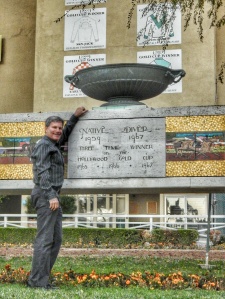 One last time at the tombstone of the great Native Diver 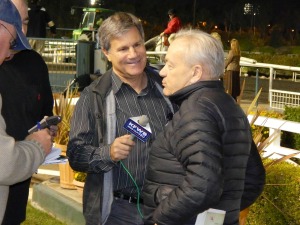 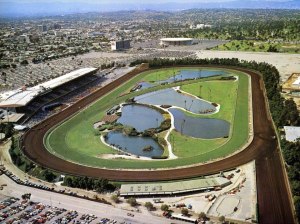 We all know this view from flying over the track on our way home to LAX. But NEVER AGAIN!