Let’s savor our last taste of the Kraft Nabisco Championship 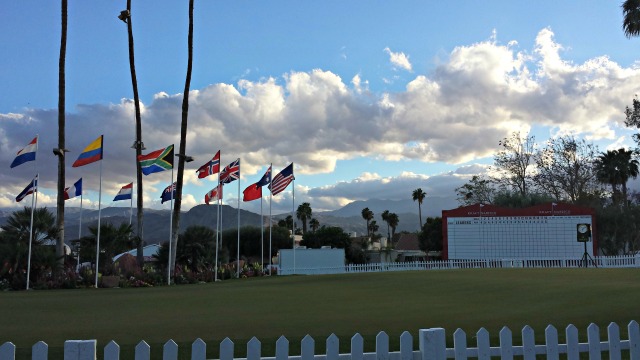 I don’t know about you, but I’m more than ready to get the majors going on both golf tours. Next week I’ll be covering The Masters for the first time (even without the injured Tiger Woods) but now it’s time to focus on the LPGA’s greatest tradition, the 43rd annual Kraft Nabisco Championship which is now in it’s 32nd edition as a major championship and in it’s final year with Kraft as it’s sponsor. And it’s my 6th year as the 18th green announcer–introducing the players as they approach the Dinah Shore statue and the bridge that goes over Poppy’s Pond (the water that every female golfer wants to leap into after winning this great tournament).

My amazing office view on Saturday and Sunday

I attended the final day of the LPGA’s Kia Classic at beautiful Aviara Country Club in Carlsbad, California on Sunday and got several of the best women’s golfers (including 6 of the top 10 players on the planet) to comment on the Kraft and what that tournament means to them. I also sat down with LPGA Commissioner Mike Whan during the Kraft Pro-Am pairing party in Rancho Mirage and we discussed the tour and the future of this special event which annually is golf’s first major of the year. 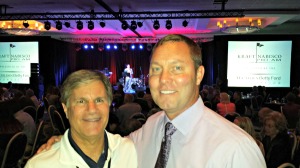 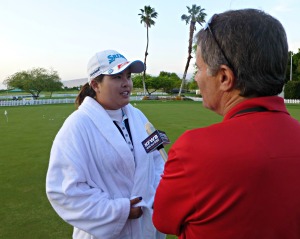 With Inbee just after her jump into Poppy’s Pond

Inbee Park with Ted Sobel on Media Day in February (edited due to technical recording problems): 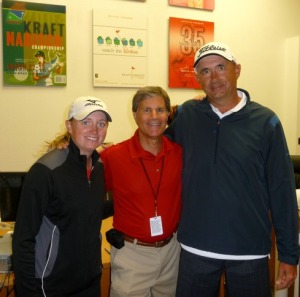 with Stacy and dad Dale after 2012 KNC title

With Lizette at last year’s KNC

Chella Choi with Ted Sobel my former KNC Pro-Am partner and native South Korean who was kind enough to do an English interview with me and she smiled all the way through it:

Chatting with Annika at her newsconference (photo by Paul Lester)

With Yoo after winning the Kraft 2 years ago

And I found out tonight that I’ll be playing with 2012 Kraft champion Sun-Young Yoo in Wednesday’s Pro-Am…so that gets this week off to a great start—and of course always looking forward to Championship Sunday (the final one for this tournament as we know it). But as the ‘Commish’ says—you can still book your hotel for Rancho Mirage next April because this tournament is going nowhere. And Dinah would be very very proud to know that! 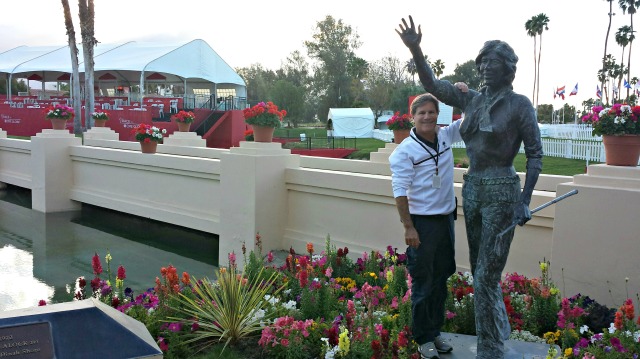 With Dinah at Poppy’s Pond