It’s all over as the Cheeseburgers beat Rothlisberger 31-25 and I just missed my exact final score prediction of 31-24 Green Bay by a 2 pt. conversion, so no complaints.

The game was surrounded by my whirlwind weekend flying into Dallas on Saturday night and then after producing my final airable audio for KFWB/KNX radio at 3:45am Monday morning, a few hours later I bussed to Austin to then fly home after a nice BBQ dinner at the airport’s smaller version of the local favorite Salt Lick restaurant (try the brisket-it’s pheeeeenominal). 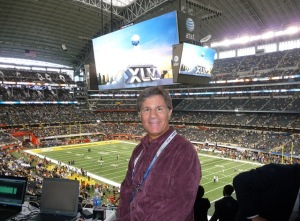 Showing off the largest TV I've ever seen!

Back to what is hopefully not the last NFL game of the year (with the pending lockout), I shuttled to the gigantic stadium with a couple of Green Bay fans as pictured (Shawn Wilson from Atlanta and Matt Mitchell who drove 18 hours from Milwaukee) and I can only assume that their $900 face value seats were worth the trip with their beloved Packers headed home to aptly-named ‘Titletown’. And just seeing that immense HD video screen in the new Cowboys’ stadium is worth the admission (as long as it’s under $50), it’s a truly special visual experience that I’ll never forget.

Pre-game with Shawn and Matt in Dallas

My game analysis sees it as the Packers simply using 3 Pittsburgh turnovers to none to take home the Lombardi trophy for the first time since ’97 as they fully dominated until cornerback Charles Woodson broke his collarbone late in the 2nd quarter and that 18 point lead then shrunk to 3 until the Pack’s clutch final drive. While his defense came through when they had to, Cali’s own Aaron Rodgers threw for 304 yards and 3 touchdown passes and could’ve easily had 5 or 6 if not for a few drops as he easily became the first Packer quarterback since Bart Starr to be named a SB MVP. Rodgers and company also worked the clock on their final drive (5 mins. 27 secs.) to perfection like a Swiss (with cheese) watchmaker running 10 plays for 70 yards culminating with a Mason Crosby insurance field goal with only 2:07 to play which gave his team a 6 pt. lead. And the Packers ‘deeepleted dee’ allowed the Steelers just 5 more plays before Green Bay officially became Mr. Rodgers’ neighborhood and the celebration began. 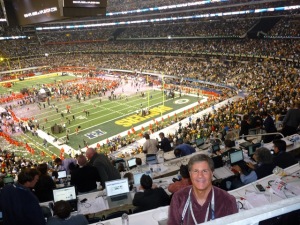 I could only watch for a few minutes before hustling down to the bowels of the Dallas Palace and into the interview rooms where I was able to ask questions of both head coaches and Rodgers before spending the next 45 mins. in the Packers locker room where Woodson kindly let me touch the trophy while recording his long awaited championship feelings.

The following audio is a collage of my postgame interviews and I hope you’ll get the true feeling of what a championship locker room feels like after hearing all of the excited Packers players, coaches, and management reach their dreams…

The Super Packers of So Cal (Matthews/Rodgers)

So the football season is over and it’s now back to covering Lakers/Clippers hoops and Kings/Ducks pucks, pro golf, and the NBA All-star game at Staples Center before spring training opens in a few weeks. Plenty of great events ahead so enjoy the ride with me. Later…

Award winning sportscaster/journalist covering major events around the world since 1973. Please check out my deep audio vault and follow me on twitter (@tedsobelsports).
View all posts by Ted Sobel →
This entry was posted in NFL. Bookmark the permalink.