On ‘Selection Sunday’ I chose the Champions Tour and the NHL to fill out my brackets doubleheader in the O.C. 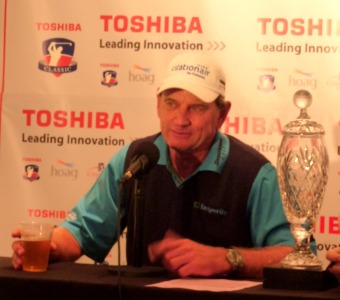 The Price was right at the Toshiba Classic

My trek down the 405 freeway got me first thinking baseball when hearing Vin Scully for the first time this spring calling the Dodgers and Cubs practice game from Vegas. Vinny was sounding spry as usual as I was headed to Newport Beach to watch Scully’s other passion-golf. 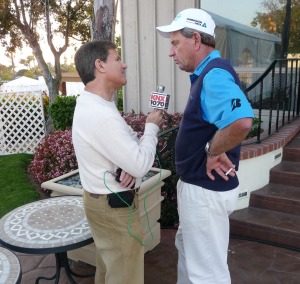 Chatting it up with the Toshiba Classic champ

It was the final round of the Champions Tour Toshiba Classic (which often is on ‘Selection Sunday’) and former world number one Nick Price won wire to wire after an amazing opening round 60 and then hanging on for a 1 stroke victory over Mark Wiebe. It was the 4th over 50’s Tour win for Price and he was kind enough to give me a few minutes after holding up the trophy…

Thanks for another great week of tournament golf, Toshiba!

Just minutes after speaking with Nick, I quickly had to get back on that freeway again just to reach Honda Center in time for the last period of the important Ducks-Coyotes hockey game. And when I turned on the car radio the locals were already quacking up trailing 4-2 which was also the final score while ironically falling to their former goalie Ilya Bryzgalov. Anaheim began the day 2 points behind Phoenix for a share of the final playoff spot in the West with only 14 to play so every point is crucial now but it was the visitors who dominated in this one. Afterwards I found myself going from doing the light-hearted interview with a newly crowned celebrating champion to dealing with a bunch of disappointed Ducks (as in forwards Todd Marchant, Corey Perry, and Coach Randy Carlyle) who are seeing their playoff chances slowly slipping away…

Won’t we EVER get to see the Ducks and Kings in the playoffs in the same season? EVER? It’s almost mathematically impossible that it still has NEVER happened!