The L.A. hockey Kings skate right back into the NHL Playoffs 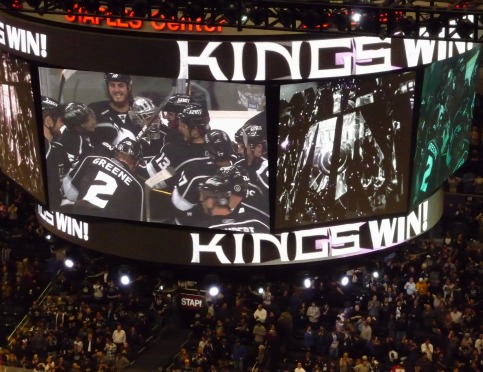 The Kings needed a come from behind 3-2 shootout win over Phoenix to reach the NHL playoffs for a 2nd straight season after missing them during the previous 8.

Some absolutely great stats standout for the Crowned Ones with goalie Jonathon Quick now a perfect 10-0 in shootouts this season and center Jarret Stoll not only scored the first goal of the game but the winner in the shootout where he is now an amazing 9 of 10 this season. After the game, I spoke with all of the key principles involved, first Mr. Quick who was quick to tell me about how his guys have come together when they needed to…

The Kings celebrate a winning effort to make the playoffs again

So there are just 2 games left in the regular season and both against the rival Ducks who are just a win or a Dallas loss away from giving Southern California hockey fans a long awaited first-actually both teams in the playoffs in the same season. Now if they can only find a way to play against each other, this town will never be the same.