Remembering Harmon Killebrew as a Hall of Fame ‘Gentle Giant’

The MLB Logo and Killebrew are linked forever

There are Hall of Famers as players and then some as human beings as well and Harmon Killebrew is one of the kings of both. Harmon lost his battle with cancer today at the age of 74 after a dignified final week of his life in which he made the announcement just last Friday that he’d given up the battle to beat his disease and die in peace with his family by his side. 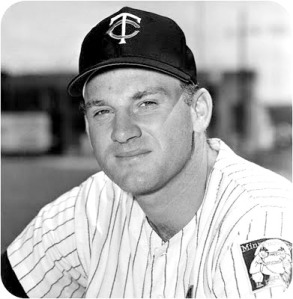 Killebrew was a massive structure in the batter’s box who could intimidate any pitcher who had to stare down at a linebacker’s body with a bat in his hands. And all of those at bats produced 573 homeruns (now 11th all-time) many of them tape measure variety rarely seen in any era (and Killer did it the natural way without any PED’s). Actually I maybe shouldn’t have used his nickname ‘Killer’ in this piece out of respect to the man who never liked how that sounded-but to those of you not old enough to remember him…sorry Harmon.

Killebrew spent 22 seasons in the big leagues all in the Washington Senators/Minnesota Twins organization until his farewell year with the Kansas City Royals. And I remember him in his prime when I used to imitate his unorthodox stance and setup at the plate like he was just daring the pitcher to throw a strike. Later (as he had believed himself) that stance would very possibly be a dominating figure in the compilation of pictures that became the MLB logo. And since the originator of the logo doesn’t remember himself who was his main inspiration, we’ll really never know but as you can see in the picture above, it certainly resembles Killebrew like few others. And since the truth will likely never come out-Mr. Killebrew deserves the honor as much as anyone! 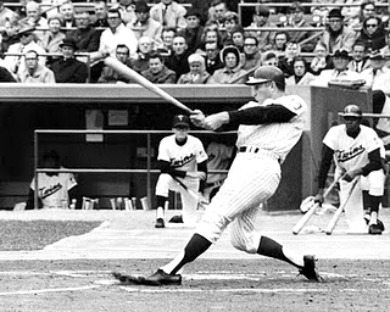 Is that POWER or what?

I guess it’s only fitting that I’m at a ballgame tonight with the Dodgers hosting the Brewers. And before the nice pregame moment of silence, I sought out a few qualified ex-players and broadcasters behind the batting cage to comment on the passing of Killebrew. I found 2 fellow hall of famers in Tom Lasorda and Brewers broadcaster Bob Uecker along with Dodgers manager Don Mattingly and first base coach Davey Lopes (who I learned got to know Harmon as a member of the Oakland A’s). I also spoke with Hall of Famer Vin Scully off mic and although he didn’t know the man, I could see the admiration in his eyes. 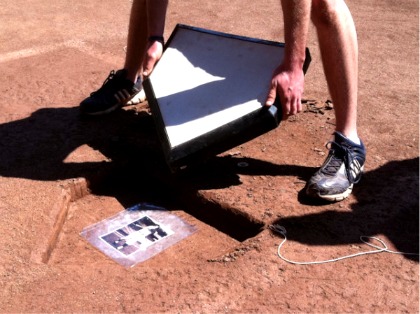 Special tribute to Killebrew under home plate at Target Field

One nice added tribute to Killebrew (who would’ve turned 75 this year) is the Twins Target Field groundscrew placing a picture of him under home plate and you just know that Harmon would’ve loved to get one last big swing to power one high and deep into oblivion…thanks for the memories Harmon, you were awesome to watch!

As the state of Minnesota and the entire baseball world mourn the loss of the greatest Twins players ever, please enjoy this audio tribute to Harmon Killebrew who deserves all of the special praises that he’ll get today and forever more…

Award winning sportscaster/journalist covering major events around the world since 1973. Please check out my new book 'Touching Greatness' and deep audio vault---and follow me on Twitter and Instagram (@tedsobelsports).
View all posts by Ted Sobel →
This entry was posted in MLB. Bookmark the permalink.