So did the Miami Heat CHOKE or not? I’m still waiting for a decent answer! 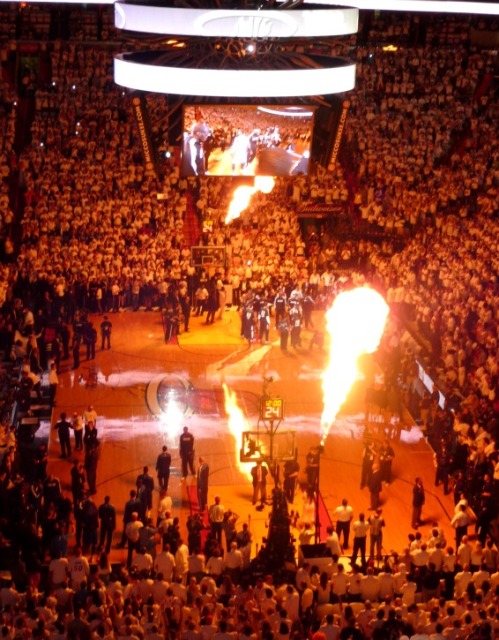 The Heat wilted under their own white heat!

Yes, that was little ‘ol me who asked both Lebron James and Dwayne Wade after losing to the Dallas Mavericks in game 6 on Sunday night if their Heat had choked away the NBA championship as heavy favorites? I had to do it or else I’d be like many of the so-called reporters there and sit on their hands waiting for another soft generic question to be asked! And even after just doing my job, Lebron did what he did best during the entire finals—and that’s defer (even though I asked them both) to D-Wade who then gave a soft answer tippy-toeing nicely around the obvious question that was on most people’s minds? If he moved that well in the last game the Heat might still be playing?

Lebron defers to his buddy again

Take nothing away from the fiesty and hungry Mavs who earned the championship by trekking through the hardest road to get there. But when it came down to crunch time the Heat melted down while the Mavs got even hungrier. The defining point of the series (and a true storyteller)was Miami blowing that late 15 point lead at home in game 2-just a killer for a team that again showed how they could wilt under pressure. And then again letting another one get away late in Dallas before returning home to try and repeat what the Lakers did just last season-take the final 2 home games and walk off with their rings. Which was NEVER to be and the rest is just history now.

I want to preface the fact that I’m not one of those Lebron haters out there and only giving my honest thoughts and opinions on what I’ve seen and read. And as for game 6 (the only finals game I’ve seen in person this year) Mr. James needs to drop his nickname ‘King’ until he wins something. If you’re a self-professed King and don’t back it up with more than great stats and not when it’s ‘winning time’…then you’re only a wanna-be in my book. If James goes out and wins a few titles later, I’ll be happy to give him his due. But until then, he’s Prince James with a whole lot of ‘splainin’ to do! I wish I was the surgeon who needs to keep removing LBJ’s foot from his mouth (because of immature statements and actions) because I’d already be planning my next trip to Tahiti!

The following audio is from my journey through both locker rooms after the Mavs won it and I hope this will give you a full sense of the moods on both sides. Including also asking Heat guard Eddie House his feelings on if his team choked? And while holding back a few tears from being disappointed over the loss…he lost it a little bit with me too as you’ll hear below. It was a great series with a disappointing final game that Miami seemed to have little or no answer for the Mavericks energy and determination to get it done! And congrats to Dallas owner Mark Cuban who I briefly with on the floor before the game (while he was shooting some hoops) and I asked him his feelings about possibly winning his first title? And he said “I’m not talking right now”… so I responded with, I’m not recording this I’m just curious. And he replied with…it’s just another game. And I said…It’s just another game my ass!!!!! And I added, you won’t sleep for 2 nights if you don’t win this one! And then he winked and finally admitted…”Yeah, it’s a pretty big game”!. His postgame response to me is also below.
Enjoy…

Dwayne Wade and Lebron James (only a stare) with Ted Sobel (asking the ‘Choke’ question):