Hall of Famer Pete Sampras talks tennis with me in our hometown of L.A. before this week’s Farmers Classic 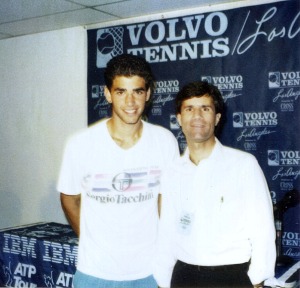 With a 19 yr. old Sampras before winning his first L.A. title

I’m back here after a 2 week hiatus in which we’ve been waiting for the NFL lockout to end while the NBA ponders possibly missing an entire season with their huge labor dispute. And in the middle of the dog days of the baseball season it’s that time again for the 85th annual L.A. Farmers Tennis Classic presented by Mercedes Benz at UCLA which I’ve been involved with for over 2 decades as a reporter and their main stadium court announcer for the past 11 years (and several years prior as the other guy behind Mike Walden and Eric Tracy).

Pete and I back together again almost 20 years later

This past Thursday I had the privilege of sitting down with tennis Hall of Famer Pete Sampras who’s 14 grand slam titles trails only Roger Federer’s 16. Pete won an incredible total of 64 ATP singles titles, 2 of them here in his hometown of L.A. on these same courts at UCLA which bring back so many good memories. So it was fun to reminisce with him about his standout career and thoughts about the future of American tennis. FYI, I’ve dealt with Sampras since his teens and it’s hard to believe that as per a college football coach’s once infamous rant put it…on August 12, Pete becomes ‘A Man’ HE’S 40!…WoW 🙂

I also had a nice chat with the #1 ranked collegiate player in the country Steve Johnson who’s been a part of back to back to back national team championships at USC. And Johnson completed a remarkable tennis season on May 30 by becoming the first Trojan in 15 years to win the NCAA men’s singles championship. Now he’s getting ready to not only play in this his hometown pro tournament but hopefully be a wild card in the upcoming U.S. Open. Immediately after his unique opportunity of getting to hit balls with Sampras, Steve and I discussed his mindset as he gets closer to his childhood dream of becoming a pro tennis player…

Here is all you need to know about the tennis week ahead at UCLA:

Tuesday’s “Super Session” will be loaded with nine first round singles matches on the schedule, including James Blake vs. Michael Berrer, Tommy Haas vs. No. 7 seed Grigor Dimitrov, Fernando Gonzalez vs. No. 8 Igor Kunitsyn, No. 5 Xavier Malisse vs. Ernests Gulbis, Ryan Harrison vs. Richard Berankis and NCAA National Champion Steve Johnson from USC against Gilles Muller. The 2011 debut of Juan Martin del Potro is slated to take place on Wednesday, while top seed Mardy Fish will be in action Thursday.

TUESDAY – The remaining nine first round singles matches will take place during Tuesday’s “Super Session,” including Blake vs. Berrer, Haas vs. No. 7 seed Grigor Dimitrov, Fernando Gonzalez vs. No. 8 Igor Kunitsyn, No. 5 Xavier Malisse vs. Ernests Gulbis, Ryan Harrison vs. Richard Berankis and NCAA National Champion Steve Johnson from USC against Gilles Muller.

WEDNESDAY – Wednesday’s “Super Session” is slated to feature four second round singles matches, including the return of 2008 champion Juan Martin del Potro, who will play either Blake or Berrer.

THURSDAY – Top seed and the No. 1 American Mardy Fish (the singles champion of the Atlanta tournament today over John Isner and leading the Olympus US Open Series Bonus Challenge) will be featured in either the day or night session as the remaining four second round matches are played.

The Monday-Wednesday “Super Sessions” will start at 2 p.m., while Thursday-Saturday will feature separate day and night sessions before one session for the finals on Sunday. As play starts at 2pm Monday through Wednesday, gates will open at 1pm and ticket windows will be open at 12:30. More information can be found at http://www.FarmersClassic.com/Tickets or by calling (310) 824 -1010 ext. 251.

And in addition to the top four seeded teams in the doubles draw this week, many of the singles players have teamed up together in attempts to shake up the doubles competition. Interesting teams to keep an eye out for include Tursunov/Dimitrov, Baghdatis/Russell, Gonzalez/Massu, Berrer/Haas, Falla/Bellucci, and Blake/Sweeting.

For the entire Farmers Classic singles and doubles draws this week please click on the following attachment:
Farmers Draw Singles and Doubles 7-24-11[1]