Ernests Gulbis preferred his 2nd ATP win over a night in jail-I think?

Gulbis serving for the title

22 year old Latvian Ernests Gulbis claimed his second career ATP title with a 3-sets win over top seed Mardy Fish on the Westwood campus of UCLA. It’s the 14th time in 85 years that a European has won the Farmers Classic title and he’s the first unseeded winner since Radek Stepanek in 2007. And Gulbis did it the hard way by becoming only the ninth player in the Open Era in L.A. to defeat the first and second seeds en route to the title.

Fish who’s ranked 9th in the world and the #1 American was the winner last week in Atlanta, was contesting consecutive ATP World Tour finals for the second time in his career. Last summer he won 2 straight titles in Newport and Atlanta.

It was also a special doubles win for 39 year old ex-Bruin Mark Knowles who teamed with Belgian Xavier Mallise on his old home court for their first title together. 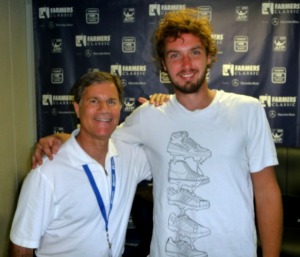 So congrats to Mr. Gulbis who is a rare outspoken pro tennis player which is extremely refreshing in a sport where either political correctness or sheer lack of personality is most previlent. After his win over Fish, Ernests (who was named for Ernest Hemmingway of all people) talked openly about his October 2009 arrest on a Sunday night after a tournament in Sweden. He spent the night in jail before being released on Monday morning, for attempted solicitation of a prostitute. In Sweden the criminal burden is on the person soliciting sex, not the prostitute offering the service. So Gulbis and a friend were apparently caught as they entered a Stockholm hotel in the company of prostitutes and eventually, according to Swedish press accounts, he copped a plea and was fined 2,500 Swedish Kronor ($382 Canadian). And the rest he has no trouble laughing about now as you’ll hear in his post championship match gang bang (if you’ll pardon the expression-lol)…

Ernests Gulbis speaks about his night in jail:

So that wraps up my 11th year as the Stadium Court announcer for the Farmers Classic (the longest running pro sports event in Los Angeles). My thanks to tournament director Bob Kramer, assistant tournament director Khim Stithem and their entire staff including director of media Pete Holtermann, and stadium producer John Coleman for another great week and the tennis was outstanding again as well. Hope to see you back there next year when it will go up against the London Olympic games which will make it a challenge that we will once again find a way to overcome. 🙂