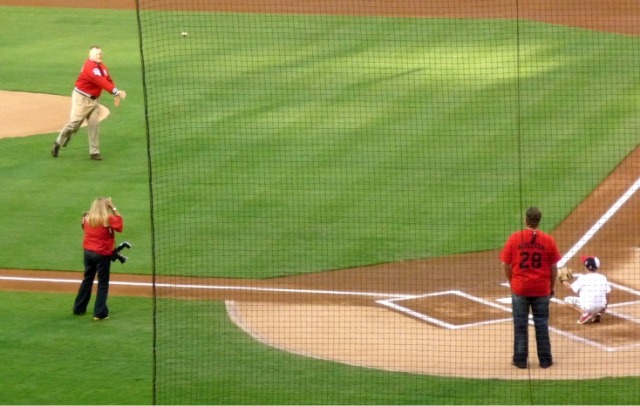 Blyleven throws out first pitch to his grandson

Minnesota Twins broadcaster Bert Blyleven, who pitched with the Angels from 1989-92, threw out the first pitch before Tuesday night’s game at Angel Stadium. Blyleven who was inducted into the Baseball Hall of Fame on July 24, was also making a homecoming of sorts, as he grew up in nearby Garden Grove and pitched the final three seasons of his career with the Angels. So it was only fitting to run into the Dutchman in the press box a few hours before his ceremonial first pitch and I got the privilege to reminisce about his days in Halo red and white and the long wait to finally become a HOFer. It took the baseball writers 14 years to decide that Bert was worthy of having Cooperstown as his alternate address and now they can never take it away from him…