Happy Halloween…so are you wearing your Andrew Luck or Erin Andrews mask tonight? 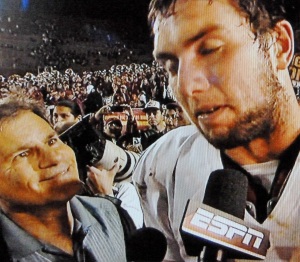 Trick or treat? What a wild triple-overtime game it was on Saturday night at the Coliseum (the first sellout since 2008) as Stanford outlasted USC 56-48. And it took a final Cardinal touchdown and 2 point conversion to send the betters in Vegas and offshore crazy. The point spread opened at 8 1/2 then quickly dropped to 8 and ended up at mostly 7 1/2, so the emotional roller coaster ride was there for any who had more than a dollar on the game (nobody said betting football was for the stable!) 🙂

The sellout is back at the Coliseum

This game was like a bowl game that told much about both teams including Matt Barkley being able to move his Trojans down the field just like his Stanford counterpart Andrew Luck who threw an awful pick 6 late in the game but still found a way to get this one into overtime. 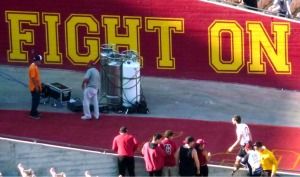 Prepping for the next NFL draft, Luck walks on the red carpet

I talked with his coach David Shaw after the game and he explained in more detail what makes Luck special (besides his obvious physical attributes) and Cardinal linebacker A.J. Tarpley who recovered the game ending fumble in the end zone. I also met up with SC defensive coordinator Monte Kiffin to get his take on falling just short on national TV. And speaking of the ESPN telecast…yes that was me who had to hustle to get my KFWB mic under Luck’s mouth during his postgame interview with Erin Andrews (who if she married Luck, could go by Erin Andrew’s Luck!) 🙂

Watching an O.T. TD from the Stanford sideline

You might be surprised that this was the only football game I’ve attended this season but it was a can’t miss on my calendar. The chance to see next year’s top NFL draft pick up close and personal was more than enough to lure my tired body to downtown L.A. after a long week of working the AM drive shift for the vacationing Bret Lewis at KFWB with a daily 3:30am wake-up call. And to think I have 2 more of those weeks to come before the end of the year? I might be put out to pasture before my time?

(click on any of the photos to enlarge them)

The postgame scrum develops to get Luck (Erin Andrews at left)

There's my opening to get the interview

Hustling for Luck paid off

As always, comments and suggestions below are appreciated to make your experience here the best possible!