No NBA opener tonight so instead, I got your Pac 12 hoops right here! 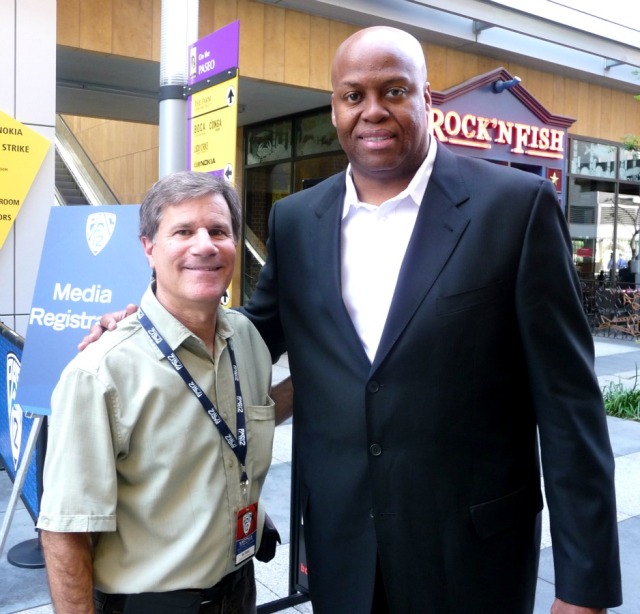 I was supposed to be at the Lakers season opener tonight (Tuesday) against the Oklahoma City Thunder but this little thing called a ‘lockout’ got in the way! So instead, let’s talk a little college basketball which is quickly upon us after the Pac 12 media day get together last Friday at L.A. Live in Downtown L.A. (across from the same Staples Center where I should be right now).

I spoke with our local head coaches UCLA’s Ben Howland and Kevin O’Neill of USC. O’Neill was on the run as I caught him for the brief interview in which we talked about the loss of his senior star guard Jio Fontan. But word today has it that the Trojans floor leader and top returning scorer is now optimistic that he could return this season after suffering a torn ACL in his left knee in August. He’s aiming for the Jan. 5 game against Arizona State but coach O’Neill says they won’t rush the kid for any reason. USC will face Long Beach State in a closed scrimmage at noon Saturday in the Galen Center for their second and final closed scrimmage this preseason. The Trojans open the real season against Cal State Northridge on Nov. 11.

As for the Bruins, they’ll be playing most of their games this season at the old Sports Arena while Pauley Pavilion gets rebuilt. I asked Howland about his big squad who are ranked 17th in AP’s preseason poll, while media’s pick to win the Pac 12 receiving 14 first-place votes, just ahead of Cal (13) and Arizona (11). We also covered how the late Coach Wooden would see his team right now and life without Coach behind the bench. 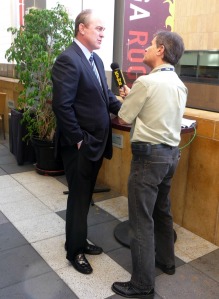 with Coach Howland on the patio at L.A. Live

The Bruins return three starters and feature one of the most imposing front lines in the country with 6-foot-10 center Joshua Smith, 6-10 twin forwards David and Travis Wear and 6-8 forward Reeves Nelson, who coach told me has been working on his jumper with the same tenacity that he goes after rebounds! UCLA opens the season against Loyola Marymount on Nov. 11.

I also ran into Pac 12 commish Larry Scott who was kind enough to chat for a couple of minutes on his way out as he continues to market this conference like nobody else before him.

And finally I saw Oregon State head coach Craig Robinson standing in the corner of the room. And you certainly can’t miss him, not only because of his size and stature but he also looks so much like his little sister you can’t help but notice. Oh, and by the way…his sis is First Lady Michelle Obama who’s the Beavers’ biggest fan. We nicely got into depth on how the President of the United States wife affects his life as a coach.

He later told me he could kick President Obama’s ass on the court if they ever played one on one. And he should since Robinson was a 6′-6″ forward, and a two-time Ivy League Player of the Year at Princeton (under Pete Carrill) and then drafted in the fourth round of the 1983 NBA Draft by the Philadelphia 76ers. But he never played in the league instead went pro with the Manchester Giants in the British Basketball League for two seasons before turning to a business career in finance along with coaching. He’s quite an engaging guy with a great sense of humor and personality, pretty interesting stuff to me and I hope to you too!…