How big is it that the Angels signed Albert Pujols away from St. Louis? Think of Babe Ruth or Ted Williams leaving their deeply-rooted homes for a 10 year mega million dollar deal in Orange County while still in their primes…that’s how big it is!

When his career is done, Pujols will likely be mentioned in the same breath as the greatest hitters ever and now Angels fans can watch him on a nightly basis just like the Cardinals faithful have done for the past 11 years. 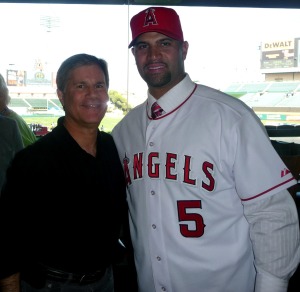 Welcoming Albert to So Cal

And the outdoor public newsconference in front of Angels Stadium on Saturday was more than most could imagine including newcomers Pujols and C.J. Wilson. I drove up 10 minutes before the televised ceremonies were to begin and was truly stunned at how many people showed up for this thing. It looked like a playoff game was about to take place, something that the newest free agents better help produce for this team or else! Or else what, I don’t know…but let’s just say the inner pressure to win bigtime has already begun in Anaheim. Not one of them would do their best Lebron by promising…NOT One, NOT Two, NOT Three. Actually NOT anything was promised but a deeply talented team that will be fun to watch and then we’ll see what happens?).

I literally had to battle my way through several hundred Halos fans just to squeeze past the ropes so I could do my job and get these interviews for your listening ears. My favorite part of the day was seeing that Torii Hunter had made it here from his real home in Texas, as he always lights up a room like a Vegas neon sign. I got his reaction to this special occasion along with team ace Jered Weaver, manager Mike Scioscia, hitting coach Mickey Hatcher (who compared signing Pujols to welcoming ‘the Bambino’ himself into an Angels uni).

Soon after Wilson was brought into the Diamond Club for our one on one and it was fun to reaquaint ourselves after recently meeting him post game two of the World Series in St. Louis when he gave me his feelings on being the pride of Newport Beach in the spotlight. And then it was Pujols turn to finally join his family for lunch just after giving me a few minutes to welcome him to the neighborhood and get some comments on the crazyness of the past few days.

Folks, this is the biggest local acquisition since Wayne Gretzky was traded to the Kings so let’s enjoy this time! And remember that every other baseball town is envious of our situation and the next few years could bring us memories that will last forever. I’m sure even ‘The Babe’ would’ve loved to be a part of this one!…