No Bull-The Lakers are actually in the 8th playoff spot with 18 to play! 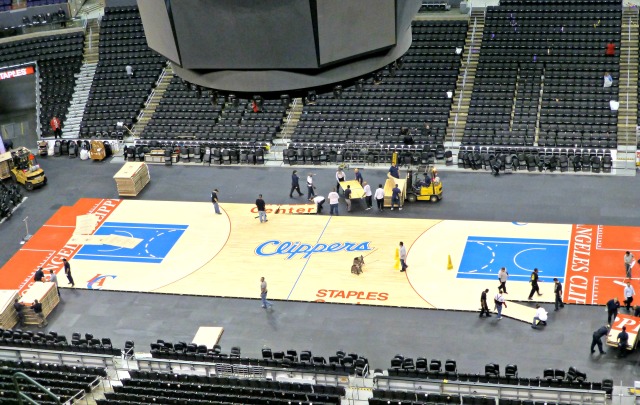 The between games changeover to Clippers hoops has begun…

To begin a long day for me of NBA doubleheader basketball at Staples Center, the Lakers put away an injury depleted Chicago Bulls squad 90-81 despite some putrid shooting streaks that saw them end the day making just 5 of 26 three-pointers.

Either way the Lakers were all smiles in the postgame locker room and the following sound is for you to digest as they’re now 2 games over .500 for the first time this season before hitting the road for the next 3 games starting in Orlando on Tuesday night. Of course it’s also the first return there of Dwight Howard since he left town in a most uncomfortable way. I’ve compared it to Lebron leaving Cleveland after his ‘Decision’ incident as Dwight’s ‘Indecision’ which caused him to look as bad as it turned into. I asked several of the guys to comment on Dwight going home including Kobe who laughed it off as something that should hardly be emotional. In other words-Mr. Vino won’t be handing D-12 any kleenex tissues to cry into anytime soon.

Dwight Howard with finally a reason to smile before facing mucho booing in Orlando on Tuesday night while still calling me ‘Shorty’ referring to me needing apple box to get this interview done:

Jody Meeks looks ahead to having his bags packed this week:

A fun sidebar–I ran into Chicago all-star Joakim Noah on his way out of the building and I asked him how his famed tennis father Yannik is doing? He said all is well and that his dad now lives in South Africa. So I asked him why there and Joakim responded…it’s a great place to be away from people-chuckling off into the fray.

The Clippers and Detroit Pistons are next–hopefully they won’t charge me rent here tonight!