Recari celebrates while I.K. stands for ‘I kan’t believe I let another get away!’

If you’ve never heard of Beatriz Recari I fully understand as I learned more about the 25 year old Spainiard today then I’d ever expected. She pulled off her 2nd LPGA tour win at beautiful Aviara resort in Carlsbad with about a 20 foot birdie putt from off the green on her 2nd playoff hole to beat I.K. Kim and then let go of all of her emotions. She was ecstatic not only over winning for the first time since 2010, but doing it with so much support from her entire team including her caddy (who just happens to be her boyfriend).

By the way, Recari is known as the ‘Iron Woman’ on tour for something that is amazing to me…how about playing in all 27 tour events last year while making every cut? The tour couldn’t confirm to me that it’s been done before but either way, that is SuperWoman-like to me.

As for Kim, it was another tough local loss for the resident of nearby Rancho Sante Fe. She was the unfortunate one who missed that 2 foot putt on 18 at last year’s Kraft Nabisco Championship while eventually losing to Sun Yung Yoo in a playoff. It was also the start for yours truly of a few tough weeks of interviewing a distraught player after they just blew a great chance at winning (the other was Kyle Stanley at Torrey Pines). They both cried their eyes out right to me and folks, if you think that’s easy to take…you are dead wrong!

Beatriz Recari shares her emotions with me as she hopes to make it two in a row at the Kraft Nabisco in 2 weeks: 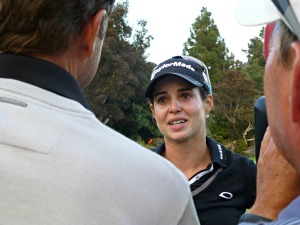 Hope to see you at the Kraft where I’ll be their 18th green announcer for a 5th straight year and looking forward to another awesome tournament.

[all pictures are courtesy of my right index finger] 🙂