Happy 85th birthday Mr. Hockey…Gordie Howe still WOW’s them like no other! 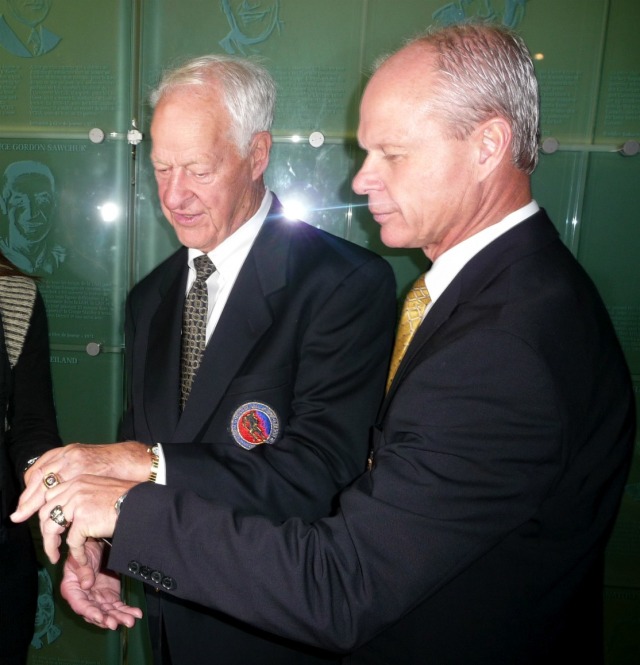 Gordie and Mark show their Hall of Fame rings

He was born on March 31, 1928 in Floral, Saskatchewan and 85 years later to this day, he’s still stands out like the biggest bouquet in the building. When Gordie Howe walks into a room it’s simply hockey royalty with all eyes glued to this living legend. I am not going to list all of his amazing accomplishments here as I’m simply posting this message to give respect to the man who I remember as one of the pro athletes that I admired as much for his being a classy individual as a superstar player.

There are way too many true star athletes who simply don’t come close to living up to their status in the real world…but Gordie is one who’s in my human Hall of Fame. I’ve never seen him turn down an autograph seeker under normal circumstances and he’s always shown dignity, class, and kindness when dealing with the public—something that his former opponents on the ice would’ve rather seen instead of facing one of the fiercest competitors in any sport. 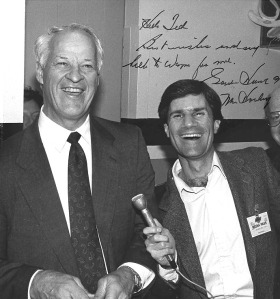 with Gordie on the Grezky watch in 1994

I’ve only been around the man several times all of which are very memorable, but two of them standout in my mind. One was interviewing Gordie on the night that Wayne Gretzky broke his all-time scoring record at the old ‘Fabulous Forum’ and he couldn’t have been more gracious and sincere about dropping into the 2nd spot behind ‘The Great One’. The other was randomly running into him in the Montreal airport after the 2009 NHL All-Star game. He was waiting for his boarding call to fly home to Detroit while I had just checked in to head back to L.A. 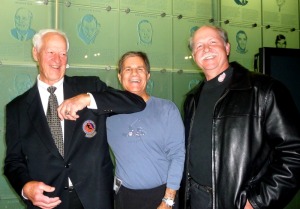 There was simply no way that I was not going to re-introduce myself when I saw him sitting with his grandson and it turned into a fantastic 20 minute or so chat. And most of it had nothing to do with hockey at all, simply talking about his family and some of the business endeavors that he was up to at the time. Actually we were so caught up in our conversation that I remember hearing the final call for his flight and I had to rush him to the gate in time). It was like we were old friends after I had opened my introduction by letting him know that his son Mark had become a friend through his scouting travels. When I was doing play by play for the now defunct IHL Long Beach Ice Dogs from 1995-2000 I would see Mark at numerous games (mostly east of the Mississippi) often being the only recognizable scout in the press area so he became a semi-regular between periods guest on my broadcasts. Since Mark and our Coach/GM John Van Boxmeer were longtime hockey friends we also socialized a few times after games and it was easy to see who was a chip off the old block in the Howe family. 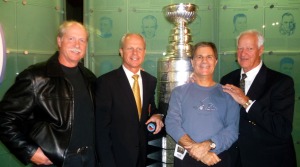 I had never met his son Marty until Mark’s November, 2011 Hall of Fame induction ceremony in Toronto and I enjoyed our nice chat learning how he oversees Gordie’s personal business and marketing along with some quality reminiscing and to no surprise at all, Marty also had that same great down to earth Howe quality. We took some fun pictures in which you can see my too casual dress because I didn’t have time to change clothes after my delayed flight had caused me to barely make the early newsconference in downtown T.O. on time.

I had already known of Gordie’s early stages of dementia but also learned that when well rested, he could be his usual self and fortunately he was in great form that day. We chatted privately and during a brief group interview (which you can hear going back to my November 14, 2011 post here) and it was a time that I’ll always treasure. Gordie and I walked past some Hall of Fame plaques together and he was telling me stories of his dealings with many of the greats of the past which included some inside memories that only he knew about. And if you don’t think that was special, you don’t have a pulse! The funniest thng that happened between us that day was while lining up to take a picture he threw an old-tyme hockey Gordie Howe elbow under my chin. I really don’t think he realized how hard he had hit me as he laughed while I was just making sure that my teeth and jaw were still intact! The best thing about this was his friend who was holding my camera, took the picture just as Gordie’s elbow was about to nail me. That’s the closest thing to a Gordie Howe hat trick that I’ll ever be a part of and a picture that I’ll treasure forever. It was a special day for Mark and his family and I was truly privileged to be there.

I sent a text to Mark yesterday wishing his father a happy birthday and he sent this message to post here for you all to read:
“Dad will be celebrating his 85th B-Day in Detroit with his 4 children, their families and also a few close friends. Catching a game at the Joe and then spending some quality time over dinner and of course an 85th B-day cake”.

Sounds like a Howe kind of day…just enjoying a hockey game with his family. Who needs more than that? He’s a very proud father and all you have to do is to meet his sons and you’ll know why. If you’d like to pass along your birthday wishes to Gordie, please do so on this post (at the bottom under Leave a Reply) and I’m sure he’ll have the opportunity to read them.

Simply put, they just don’t make ’em like Gordie Howe any more…and may he enjoy many more years of just being himself, which is one special man and THE Mr. Hockey…Happppppppiest of birthdays Gordie!!!