As we approach April, golfers start thinking about the majors with the Masters just two weeks away. But always the week before the guys take on Augusta National, the LPGA tour is in the spotlight in Rancho Mirage for the Kraft Nabisco where I have the privilege for a 5th straight year of being their 18th green announcer on Saturday and championship Sunday.

This past Sunday I covered the final round of the LPGA’s Kia Classic in Carlsbad and met up with some of the women who’ll be competing next week on the Dinah Shore course, right after they signed their scorecards. Logically some were all smiles having completed a great finish to their tournament like winner Beatriz Recari of Spain who posted her 2nd tour title. Others weren’t so happy but still gave me a little piece of their time for some preview thoughts on the Kraft.

Once again—Here’s my 1-on-1 with Recari after winning the Kia and you can understand why she wouldn’t let go of her bulky trophy even while chatting with me. The next day Beatriz moved up 19 spots to #26 in the world:

A few weeks earlier at KNC media day, I spoke with now world #24 Sun Young Yoo about coming back to defend her title:

I also got a few comments from the new host of the Kraft Nabisco Pro-Am events on Tuesday and Wednesday-Hall of Famer Annika Sorenstam:

New #1 in the Rolex women’s world golf rankings is Stacy Lewis who won the Kraft just 2 years ago and is coming into this week on a major high, winning 2 of the previous 3 events on tour. She was very disappointed at finishing the Kia on a sour note, with a double bogie on 18 to end up 3 strokes behind Recari… so she was obviously in NO mood to chat with me at the end of her round. But her father Dale was standing nearby and he graciously gave me a few minutes of his time to set up this first major of the year for his now famous daughter:

World #6 Ai Miyazato is looking for her first major win after 25 other pro titles and her game is rounding into form nicely:

World #8 Suzann Pettersen walked off the Aviara golf course with a T-13 in the Kia and then talked to me about trying to improve on her three runner-up finishes in the Kraft:

World #10 Paula Creamer (the 2nd highest ranked American) had a solid week in Carlsbad before her final round 77 and is still excited about going for her first jump into Poppy’s Pond:

World #12 Christie Kerr finished the Kia with a nice T-3 an then told me she’s ready for another big week:

World #16 Azahara Munoz of Spain was all smiles after a 71 getting her a T-9 and some momentum going into Rancho Mirage:

World #32 Karine Icher of France stopped to chat even after finishing T-43 and 11 shots off the pace…and showed a great attitude going into the Kraft:

World #37 Sandra Gal of Germany a former winner at the Kia loves the Dinah Shore course and would love to make that her first major victory:

Chatting it up with Sandra Gal

USC’s Lizette Salas who moved up 8 spots to #38 in the world after a nice T-6 in the Kia and only 2 shots back, can’t wait to show her So-Cal followers that she’s ready to move into the bigtime in just her 2nd time playing the Kraft:

World #51 Jenny Shin of Korea and a Torrance High grad is getting closer to reaching her goal of winning on tour…how about 21 of 25 cuts made last year along with 5 top-10 finishes and hoping that some extra practice with the flat stick will be the difference:

Two-time Kraft Nabisco titleist Julie Inkster is back after a year off from elbow surgery and she told me that golf is now a hobby compared to a job, but still looks to win everytime out:

Another former Trojan Belen Mozo who’s originally from Spain and now lives in Florida, loves coming back to So Cal where she gets a nice following and her game is rounding into form on a course that she loves:

And finally some love for the cross-town UCLA Bruins and their local favorite Mo Martin who missed being in the Kia Classic playoff by just one shot while moving up 58 spots to #110 in the world in front of her biggest fan–her very proud 101 year old grandfather. Mo is playing lights out and is beaming at the thought of the biggest challenge of her golfing life:

I’m also looking forward to seeing Pepperdine star and Thousand Oaks resident Danielle Kang’s first time in the Kraft as a pro. She’s currently up to 23rd on the LPGA money list in just her 2nd full season on tour. And we have one thing in common…we both have the same guy overseeing our game in the impressive Brady Riggs (out of Woodley Lakes GC in Van Nuys, California) who’s a top 100 golf pro. Of course Brady has taken Danielle to major league level, while I’m still in the developmental league just trying to make the cut in every day life! 🙂 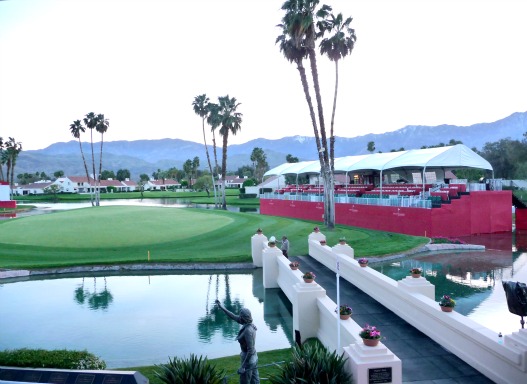 Have a great time in Rancho Mirage and please stop by and say hello at my office—the bridge leading onto the 18th green with Dinah’s statue keeping me company over the weekend. 🙂