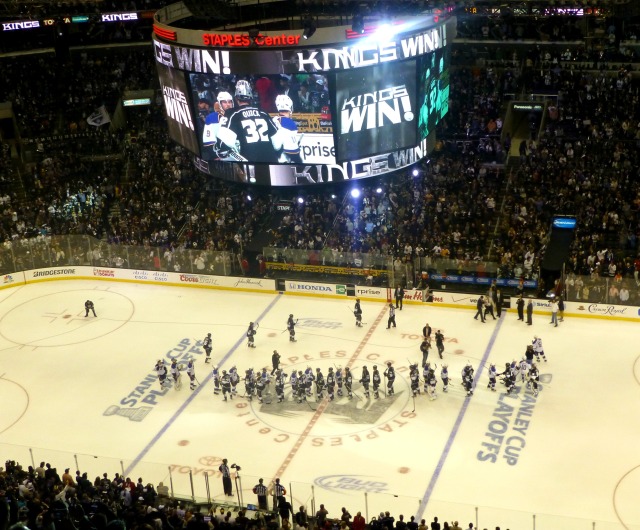 Kings eliminate the Blues again, and the perfect picture for the home fans

I said before game 3 when the Kings trailed their first round series 0-2 that the winner of that one would win this series. And the L.A. skaters made me look good by winning the next 4 including tonight’s clincher 2-1 to advance to round 2 against either the Ducks (who lost in Detroit tonight) or Sharks (who will be well-rested whomever they next play).

You can thank Dustin Penner’s game winning howitzer slap shot with 0.2 seconds left in the 2nd period that fortunately deflected off of a Blues defenseman just enough to fool goalie Brian Elliot and that was enough for Kings goalie Jonathan Quick to pick up his 24th career playoff win (just 2 shy of Kelly Hrudey’s team record). Quickie stopped 21 Blues shots including a few too many on the doorstep but that’s why he won last year’s Conn Smythe trophy and he’s getting hot again at just the perfect time! 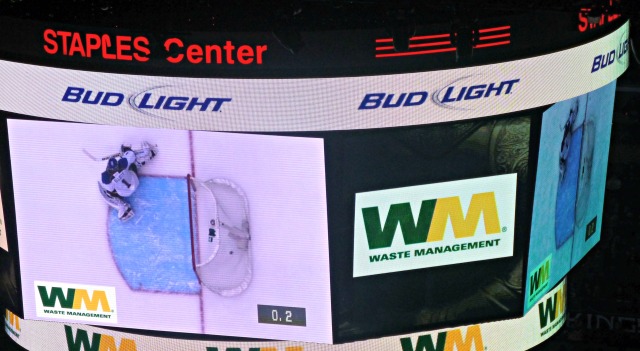 Penner’s shot is in the net with plenty of time to spare…no waste clock management! 😉

Kings RW Dustin Penner after scoring another playoff game winner and I suggested to him to make some 0.2 T-shirts reminiscent of the Lakers Derek Fisher’s 0.4:

Kings TV analyst Jim Fox talks with me about the series win over St. Lou and then we look ahead to the next round vs. either Anaheim or San Jose:

The Kings may’ve done it the hard way (especially compared to last year’s sweep of the Blues) but they’ll take a hard-fought 6 game series victory as they are once again playoff tested and obviously ready for the task before round 2. It’s almost a footnote that the Kings have now won 10 straight at Staples while the Blues have lost their last 8 here and L.A. would have home ice advantage against the Sharks. BUT it would be a great start to making it a TRUE classic So-Cal rivalry against the Ducks who must win Sunday night’s home game 7 over the Wings to get there. And you know that I’ll be there to give you all the post game sound your ears can handle…Oh and sorry Kings fans, but GOOOOOOOO Ducks! We need that matchup for hockey to get to another level in this town, like it or not!