It’s a great day for hockey…but not if you’re a Ducks fan! 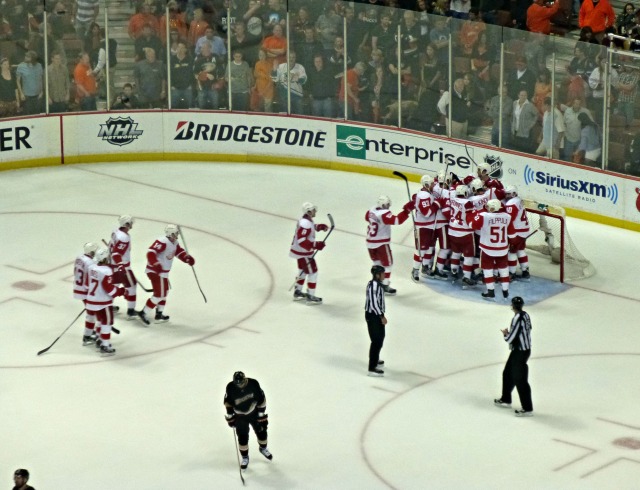 As my old mentor at the University of Wisconsin the legendary coach ‘Badger’ Bob Johnson used to always say “It’s a great day for hockey” while his rallying slogan was “60 minutes, No alibis, No regrets”! Well that’s what a game 7 is all about in the NHL playoffs and the Ducks played less than 60 minutes with a few alibis and plenty of regrets. The Detroit Red Wings stunned them with a 3-2 win to advance to round two while it’s an earlier golfing season than expected for the Ducks.

Anaheim got off to another slow start falling behind just a minute and 49 seconds into the game and then it was battle from behind all night long trailing 1-0, 2-1, 3-1 and then finally running out of time on the clock and the season. The Ducks had an NHL best 15 come from behind wins during the regular season but their magic also ran out something that was one of my themes of questioning in the postgame locker room. I also wanted to know about the guys feelings on missing out on what would’ve been the first Ducks-Kings playoff matchup in their 20 year history…something that bums me out more than most from what I could gather (although some of the players and Coach Bruce Boudreau admitted that it was on their minds as well).

Another thing that’s a reality again is whether this was 42 year old Teemu Selanne’s final NHL game something that he said he’ll need more time to think about. But he did admit to us that having a solid team returning next season could be a factor if he decides to give it another shot!

Once again, it’s not been an easy few weeks for me and others who do my job of gathering postgame sound…as I’ve had to endure totally pissed off locker rooms with the Lakers, Clippers, and now the Ducks all losing their elimination games at home. None of them are in the mood to talk to anyone, especially us media types…but hey, somebody has to do it and that’s why they make the big bucks (and most of us don’t!).

Ducks captain Ryan Getzlaf who was the first disappointed player we reached in the room afterwards and he pretty much said that his guys were simply out-played when it mattered:

Ducks right winger Corey Perry who never scored a goal in the entire series…and it was hardly fun having to ask him about that!:

Ducks rookie right winger Emerson Etem who’s a native of Long Beach so I had to ask him about not getting to face the Kings in the next round and if he’d ever followed my Long Beach Ice Dogs games back in the day?…and yes, this was the first time I had the chance to introduce myself to him:

Ducks goalie Jonas Hiller on his tough way to end the season:

Ducks right winger Bobby Ryan who’s always candid about his feelings but he was at a loss for words when I asked him how does he explain what happened in this home game 7?:

And finally Teemu Selanne who I believe him when he says that he needs time to think about his future plans (and NO, this isn’t like the Dwight Howard situation-not even close!):

It is NOW for any Ducks-Kings playoff matchup!

So now it’s down to the Kings around these parts to take care of biz in round 2 against San Jose with L.A. enjoying home ice advantage in the post season for the first time since 1992. That series is projected to start on Tuesday and Thursday nights at Staples Center while Honda Center’s next ice appearance will be only in the drinks of Rolling Stones fans next week!

One personal observation, Ducks fans should be embarrassed to be out-cheared by Red Wings faithful through-out much of the game…how you can allow that to happen and in a game 7 of all times is unthinkable. Of course this is hardly Hockeytown but c’mon…where’s your team pride? Many feel it would’ve hardly been a home ice advantage in Anaheim against the Kings anyway as L.A. fans always get their share of tickets for the games in the OC something that will always keep L.A. ahead of Anaheim concerning the local hockey spotlight. I can only assume that’s mainly because the Kings were in existence 26 years before the Ducks were ever a team, that they’ll always have the more loyal following…but in your own barn???? NEVER…No alibis and No regrets!