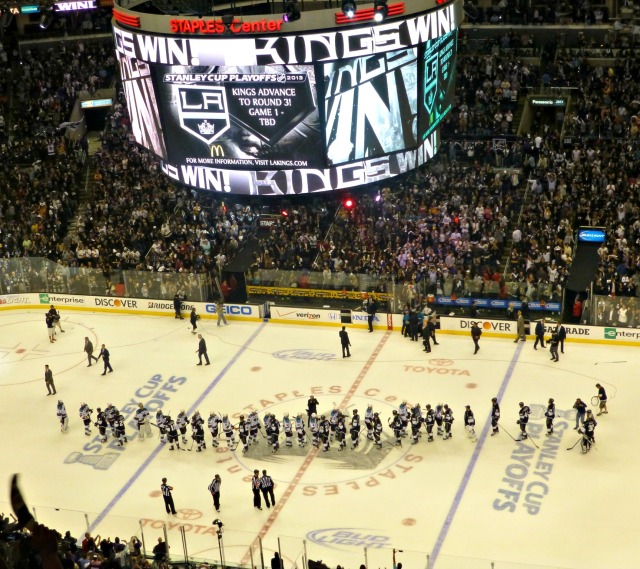 Aaaaaaaaaaah…game 7’s! That’s what pro sports are all about and it was another classic one at Staples Center as the Kings got 2 second period goals from Justin Williams while goalie Jonathan Quick stopped 25 of 26 shots for a 2-1 win over the San Jose Sharks. And the visitors gave it everything they had and were just not as fortunate and/or opportunistic as the Kings to advance to the Western Conference final which will either begin with Detroit in L.A. on Friday or the Kings opening in Chicago on Saturday (depending on Wednesday night’s game 7 winner in Chicago).

Williams jams in first goal of the game

Williams can easily be named ‘Mr. Game 7’ as he’s now scored 5 goals with 4 assists in 4 career game 7’s and as he told us afterwards, he could’ve scored a hat trick or even more tonight. As for Quickie, that’s exactly what he was making several acrobatic saves to keep the Kings in a quest for back to back Stanley Cups.

The Kings have now won 14 straight on home ice (7 of those in these playoffs) and of course would love to stay at home against the Redwings, but whomever they face next they certainly are battle-tested for whatever comes their way.

The following are my sounds of the postgame from the Kings locker room and one of my themes of questioning was that after all of this tough grind to get here, they are only halfway to their ultimate goal…