How about a stop at UCLA with an added personal tribute to the ‘Wizard of Westwood’ ! 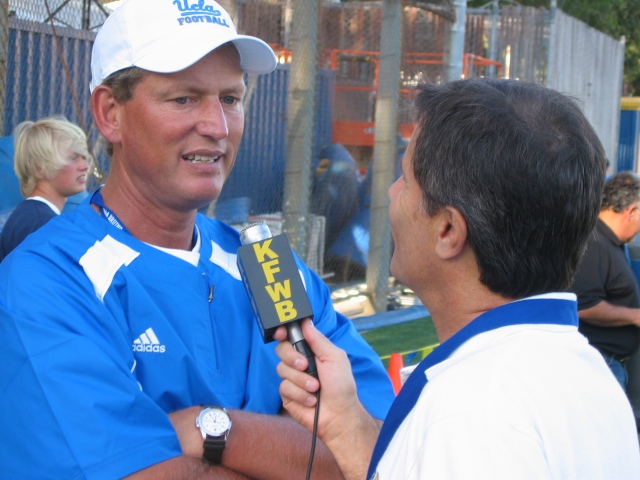 While I’m working here in St. Louis getting ready for game 2 of the World Series, it’s time to change the pace and fill out a mid-season report card on the UCLA football program which is as up in the air right now as I’ll be on my flight back home tomorrow. The disappointing (or are they?) 3-3 Bruins play a rare Thursday nighter at Arizona against the 1-5 Wildcats who just fired coach Mike Stoops. So how will the boys from Westwood deal with that scenario along with their own issues? As in will Kevin Prince be able to handle the chore of leading them into the endzone more often without turning the ball over since he’s now in charge at QB again after his buddy Richard Brehaut broke his leg in their previous win over Wazu?

And then there’s the cloud of pressure hovering over the future of head coach Rick Neuheisel if he doesn’t get his Bruins to a bowl game this year? It seems likely he’ll be gone with anything less than that getting accomplished despite his A.D. Dan Guerrero being non-commital when saying that we are all “day to day”. Maybe Dan, but I don’t need to win 7 football games this season or else, except for maybe in a few parlays? 🙂

I asked Neuheisel one on one if being the next Stoops ever crossed his mind when trailing late at the Rose Bowl to Waszu? And he answered like a man taking full responsibility for ‘his program’. Unfortunately Rick was dealing with a bad cold at the time and I can only imagine how much more sick he’ll feel if his Bruins don’t win in Tucson tonight? Mr. Prince got into some detail on what lies ahead for him while mentoring his freshman backup Brett Hundley. And then my regular weekly chat with Bruins tailback Johnathan Franklin showed that he’s still being very positive about his guy’s chances of going bowling this season (and not just to the local lanes trying to avoid those gutterballs).

The following chats are from practice last Wednesday during the Bruins bye week…as it’s time for them to show their true football prowess or continue to slide into ‘Bolivian’ as Mike Tyson once said!…

And while we’re talking UCLA, last week would have been Coach John Wooden’s 101st birthday. It’s been 3 years since my annual calls of birthday well wishes ended to Coach. The last time I asked him how it felt to be 98? And in a slower than usual reply he said with a little chuckle “it’s better than being 97 because I’m still here”. We only spoke for a few minutes but it being our last chat on the phone will stay with me forever. I used to love it when he was obviously screening his calls with an old-school answering machine and while I was leaving a message he would pick up the call. At least it showed that he didn’t mind hearing from me, as you can only imagine how many calls and letters, etc. he would get every day.

Picture was taken by my late friend Steve Grayson

This picture was taken on his special day in 2003 when the court at Pauley Pavilion was named Nell and John Wooden Court…one of the standout events I’ve ever attended with most of his former players on hand to be a part of the ceremonies. It was also very special to me because I got the rare opportunity to watch some of the game in a room with Coach Wooden and his close pal and ex-Bruin All American Mike Warren before Coach was to meet with the media at halftime. I remember that Magic Johnson was in the house because his Michigan State Spartans were there against the Bruins. But the standout part of the night for me by far was being in the presence of Coach as he talked about the game after each play and getting the opportunity to banter with him in his own shrine. Believe me, these were rare and special moments that were never taken for granted!